Elaine McDonald in her own Words 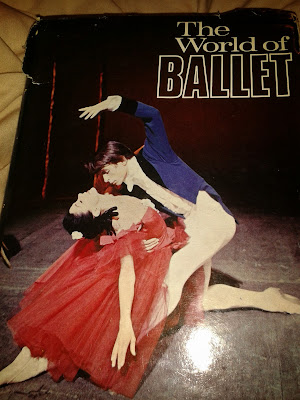 Spurred by this video from yesterday's New York Times  I have begun to de-clutter my library. Books are such beautiful things that I hate to throw them out even when they are hopelessly out of date. As I tweeted yesterday throwing out my Terrell on the Patents Act 1949, my Kerly on the Trade Marks Act 1938 and my Copinger on the Copyright Act 1956 feels like a betrayal. A bit like putting one's grandmother into a retirement home. But then the video from New York is a terrible reminder of the alternative. So I held my nose and got on with the job.

But then I came across this treasure: "The World of Ballet" edited by Anne Geraghty which was published by Collins in 1970. It is an anthology of articles with contributions from Arnold Heskell, Clement Crisp, Rudolf Nureyev and many others. I would have bought it from the Ballet Bookshop in Cecil Court which has sadly disappeared.

McDonald came from Scarborough and had her first ballet lessons in the Queen of Watering Places. When she was 11 she won a competition organized by the Royal Academy of Dance (of which I became a Friend this morning) and Girl (a magazine for girls that was published between 1951 and 1964) for a ballet scholarship in Leeds. No doubt encouraged by this win she decided to make her career in ballet. She auditioned for and was accepted by the Royal Ballet School which would then have been in Baron's Court, just opposite the Cromwell Road from my old school. The Royal Ballet School's premises had enormous plate glass windows that stretched the full height of the front elevation. We tried so hard to hit a cricket ball through those windows - a feat that would have required the strength and prowess of Colin Cowdrey or Ken Barrington as the ball would have had to clear not only the boundary but a 9 foot terra cotta wall and a 6 lane dual carriageway to hit those windows.  It was never accomplished in the 5 years I was there and now both schools have moved - we to Barnes and the Royal Ballet School to Floral Street.

Returning to McDonald's story, her first appearance on the stage was in a pantomime produced by Cyril Fletcher where she and other girls danced puppets, children, flowers and princesses. Not long afterwards she auditioned for the London Ballet under Walter Gore, One of her first performances was as a member of the hunting party in Giselle and she tells how the long, heavy, velvet dress eased her into her role. She describes how she prepared for that first role, how she adjusted her hair and applied her make-up, how the performance seemed to go well - until she received a note from the ballet master on how her dancing could improve. After Giselle she danced the Prelude in Les Sylphides. Regrettably the company fell into difficulties and had to be disbanded.

After a spell at the Palladium she joined the Western Theatre Ballet. She wrote


"I did not know much about the company, but I had heard and read that it was young, vital and very forward -looking."


"When I joined the Western Theatre Ballet it was considered one of the most modern companies in Britain, Not because the basic steps were different - we sill use the steps I have known since I was a child. But because the stories which some of our ballets tell are stories of everyday life. Our repertoire is very varied. It includes La Ventana, one of the very first classical ballets to be performed, Mods and Rockers '63 danced to the music of The Beatles, with such tunes as "She Loves You".

At the time she wrote that chapter Elaine McDonald was a soloist with the company. Her first principal role was in Beauty and the Beast which Darrell choreographed to a specially commissioned score by Thea Musgrave. She refers to that work in the last paragraph of that chapter. I saw that work shortly after it had been premièred in London at the King's Theatre in Edinburgh.

There are some lovely photos of McDonald as a little girl in one of her first stage appearances, another of her wearing a tutu in arabesque at age 9 and yet another with Kenn Wells and Peter Cazalet in Ephemeron. Cazalet, incidentally, was a talented cartoonist and the book contains lots of his drawings some of which are very funny indeed.

As I said in my article on Darrell it was good to see McDonald again and particularly good to see her smile. She has not been well and she and I are nearly 45 years older than we were when she wrote that chapter and I bought that book but when she smiled on television I saw only that powerful yet dainty young dancer who captivated audiences all those years ago.