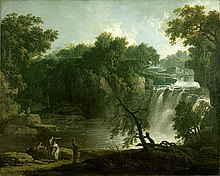 La Sylphide was first danced in 1832 when Europe fell in love with all things Scottish. This love of all things Scottish had all sorts of manifestations: the novels and other works of Sir Walter Scott, Donizetti's Lucia di Lamemoor, Scottish baronial architecture and lots of dramatic landscape painting like Jacob Moore's Falls of Clyde above. This ballet is in the news just now because it has been brought to London by the Queensland Ballet.

The Australians have had good reviews from the press this week. Far better, indeed, than their cricketers though that may change as there are still three more days of play at Trent Bridge.   Louise Levene wrote in the Pink'Un "Peter Schaufuss’s version of the Romantic tragedy is a fine showcase for these well-drilled dancers" 6 Aug 2015. Zoe Anderson rejoiced in "Romantic tale features fleet-footed footwork from the Queensland Ballet" 6 Aug 2015 in The Independent. Judith Mackrell celebrated the company's "impressive mastery of a tragic fairytale" 6 Aug 2015 The Guardian.  It seems also to have gone down well on BalletcoForum. Whether that is because it is practically the only ballet in the United Kingdom this week or because it really is a good show remains to be seen. Gita and I shall see it on Saturday and I will review it on Sunday or shortly afterwards. My hunch is that it is a good show and having listened to the company's artistic director Li-Cunxin at the London Ballet Circle last Monday I think he will have made damn sure that it will be good.

The show that Queensland Ballet has brought to London was created by Peter Schaufuss for what is now the English National Ballet in 1979. I was reminded of that production at Li-Cunxin's talk to the London Ballet Circle. I had completely forgotten about it and have now only the fuzziest recollection. The performance that sparkles in my memory is one by Carla Fracci as  the sylph. Here she is dancing with Schaufuss though I think the production I saw was by American Ballet Theatre and I can't remember whether I saw it on tour or when I was a graduate student in the USA.

However good the Australians may be the sad fact is that they will be on their plane back to Brisbane soon and this lovely ballet will hibernate again. So this resource page is my attempt to keep it alive a little in the public mind for a little bit longer.

First, The Royal Ballet have a version though it was last seen at Covent Garden in 2012 (see La Sylphide on the Royal Ballet's website). So, too, do the Bolshoi who ran four performances in June and will stage another on 3 Oct 2015 (see La Sylphide  on the company's website). I understand from Gillian Barton that Ballet West are planning a production for 2017. That will be really something because Taynuilt is actually in Gurn and Effie territory and the school and their teachers have so much talent.

For those who want to know more about the ballet there are pretty good synopses on the Bolshoi and Queensland Ballet websites. Both companies explain the historical significance of the ballet (see About Performance  on the Bolshoi site and The History on Queensland's). It was one of the first ballers (if not the first ballet) in which the ballerina danced on pointe. There are also useful articles on the ballet in Wikipedia, the Ballet Encyclopedia and The Ballet Bag.

11 Aug 2015 There is a very interesting article by FLOSS on BalletcoForum mentioning some of the differences between the Schaufuss version of La Sylphide and the Koburg version.
Posted by Jane Lambert at 10:10