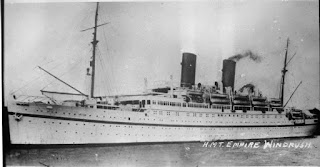 On 22 June 1948 the MV Empire Windrush, a former German troopship, sailed into Tilbury docks with just under 500 passengers from Jamaica. Those travellers came to London to fill a temporary labour shortage as the United Kingdom recovered from the Second World War. The voyage symbolizes a movement of peoples of enormous economic, cultural and political significance both for those taking and for the communities in which they settled.  Other travellers came to the UK from other Caribbean islands and other parts of the Commonwealth. There were also similar movements from the Caribbean to Canada, from the rural south of the USA to the industrial north, from the overseas possessions of other European powers to France, the Netherlands, Portugal and many other countries.

To mark the 70th anniversary of the voyage of the Empire Windrush, Sharon Watson is creating a new dance piece entitled Windrush: Movement of the People which will be premiered at West Yorkshire Playhouse on 7 Feb 2018. I was lucky enough to see a preview of the work on 28 Sept 2017 (see Phoenix - A Double Celebration 14 Oct 2017). Last Friday at a sharing of work in Phoenix's studios I was shown some more.  It was not an easy watch and I did not expect it to be.  As I noted in October the first part of the work was harrowing enough as it showed the separation of families". As we know what happened after those travellers arrived - Notting Hill, Smethwick and Enoch Powell - I expected the second part to be emotionally harrowing. But I did not expect it to hit me as hard as it did. Tears welled up to the words "You called and we came". The artists who had been so full of exuberance in the first act appeared almost ghost like as they experienced the greyness and cold of post-war Britain.

At least some of those tears were generated by memories of my late spouse who came from Sierra Leone.  My father in law, an Anglican minister. and my mother in law. a nurse, had come to this country about the time of the voyage of the Windrush.  My spouse was brought up by aunties and cousins in Freetown and remembers a land of abundance, sunshine and love. In 1955 my father and mother in law sent for their child. At first the voyage was delightful but as the ship entered the Western Approaches everything became dark and cold. Not even the sight of my father and mother in law at Liverpool docks comforted the child.  Eventually the child adapted to life in the United Kingdom, read law and was called to the Bar which is how we met. We had a marriage that lasted nearly 27 years which was strong enough to withstand racism, all the travails of practice and even my gender dysphoria. Only motor neuron disease broke us up in 2010.

Sharon Watson's genius was to say something to me but at the sharing of work I realized that I was not the only one with memories to share and perhaps tears to shed.  The daughter of the captain of the Windrush was at the sharing. So, too, was one of the passengers, a magnificent gentleman who must have been in or close to his 90s who rose ramrod straight to acknowledge his welcome. Sharon Watson's family were in the audience as were others who had made their home in Leeds and contributed so much to the city.

Even though the work is still not quite finished, Windrush is already a success.  After opening in Leeds it will tour the country visiting Keswick, Cheltenham, Doncaster, Leicester, London and Newcastle as well as a quick crossing to Aachen for the Schrittmacher Festival.   I left details of this work with the Dutch National Ballet when I visited them on Sunday.  Aachen is only 125 miles from Amsterdam and there is a motorway and fast train all the way.  A trip to the show and back is doable without an overnight stay.  I would certainly urge them as well as my compatriots in the rest of Britain to see this mighty work
Posted by Jane Lambert at 23:22