A Day Not To Be Missed: KNT's "Day of Dance" in Manchester 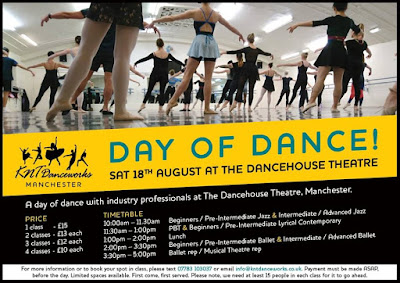 That was great fun but this year we regulars at KNT are ready for something different.  Accordingly we are offered "A day of dance with industry professionals at the Dancehouse Theatre Manchester." In other words, wall-to-wall classes on Saturday 18 Aug 2018 from 10:00 in the morning to 17:00 in the afternoon.

Two of the industry professionals have already been announced.  They are Rachael Crocker and Harriet Mills.  Rachael will be teaching advanced jazz, beginner and pre-intermediate ballet and musical theatre and Harriet advanced ballet.  Both have very impressive credentials


"Rachael trained at Northern Ballet School and was a Royal Ballet senior Associate whilst training she qualified and took part in the prestigious Adeleine Genee Awards and also won the IDTA ballet scholarship.
Rachael recently finished performing at the London Coliseum in Kiss Me Kate (choreographed by Will Tuckett) as Dance Captain. Prior to that she was part of a small group recording the soundtrack to the new Mamma Mia movie ‘Here We Go Again”.
Other theatre credits include: ‘Dick Whittington’ at the London Palladium, ‘Strauss’ (National Tour); ‘Kiss Me Kate’ (Welsh National Opera); ‘Cats’ (RUG Australia) as Tantomile understudy Jemima, Demeter and Victoria Graziella in ‘West Side Story’ (National tour); first understudy Meg Giry in ‘The Phantom of the Opera – 25th Anniversary tour’ (National tour); ensemble and first understudy Wendy in ‘Peter Pan’ (Mayflower theatre); ‘We Will Rock You’ (Antwerp Belgium); ensemble and understudied and played Wendy in ‘Peter Pan’ (Grand Canal theatre Dublin); first understudy Cinderella in‘Cinderella’ (Orchard theatre); ensemble and 1st understudy Iris in ‘Fame’ (National tour); ‘We Will Rock You’ (Dominion theatre); swing in the original London cast of ‘Movin’ Out’ (Victoria Apollo); alternate Ice Princess in ‘The Snowman’ (Peacock theatre); swing and first understudy Zsa Zsa in ‘Love Shack’ (National tour); Dance Captain and swing in ‘Grease’ (Victoria Palace, Japan and National tour); ‘Cinderella’ (New Victoria Woking), Rumpleteaser, Demeter, Jemima and Tantomile in ‘Cats’ (Stuttgart Germany); Meg Giry in ‘The Phantom of the Opera’ (Hamburg Germany) and the Spirit in ‘The Spirit of the Dance’ (US tour).
Film and TV credits include: ‘Devils in the Disguise’ for the Discovery Channel, ‘The Phantom of the Opera’ directed by Joel Schumacher and ‘Finding Neverland’ directed by Marc Forster.
Radio Credits include: BBC radio production of Smith of Wooten Major.
Rachael has also appeared on the Al Murray Show, took part in the 2008 Olympic handover ceremony and guested for Rock of Ages for their performance at West End Live. She also regularly performs for Incandescence Contemporary Circus Theatre Company and Private Drama Events.
Teaching: Rachael graduated from the Royal Academy of Dance gaining a Distinction for The Professional Dancers Teaching Diploma and teaches at various schools and colleges across London. She taught scholarship classes for the IDTA and RAD along with various workshops in ballet and jazz."


Harriet is a principal with the Karlsruhe State Ballet.  I was lucky enough to attend one of her classes earlier this year (see One of the Best Ballet Experiences Ever  14 Feb 2018).   This is her bio:


"After attending her first vocational school from the age of 11, Harriet Emily Mills left the Hammond School, Chester, to start at the Royal Ballet Upper School in London. She graduated after 3 years with her first job with the Staatballett Karlsruhe and has worked as a professional ballet dancer there for 6 years. Harriet has danced roles such as Odette/Odile in Swanlake, Myrtha Queen of the Willis in Giselle and Katharina in Taming of the Shrew. She has been involved with many creations by choreographers such as Davide Bombanas (Der Prozess), Terence Kohlers (Misia Sert, Das Kleine Schwarze/ the Riot of Spring) and Reginaldo Oliveiras (Edith Frank in Anne Frank). After 6 years of working her way through the company Harriet is now a Principal Dancer."


Space is limited and bookings have to be made and classes paid for in advance.   The email address and phone number for further information appear on the poster above.  The Dancehouse is a short walk from Oxford Road station which is on the Leeds to Liverpool mainline.  There is an NCP multistory car park in Chester Street which is literally round the corner from the Dancehouse.  The car park offers a discount for daytime parking on Saturdays. There is usually plenty of free street parking on Saturday afternoons.  There is a bus stop outside the studios which is served by several routes. The nearest tram stop is at St Peter's Square which is a few minutes walk from the Dancehouse.
Posted by Jane Lambert at 10:12