Best "Day of Dance" Ever 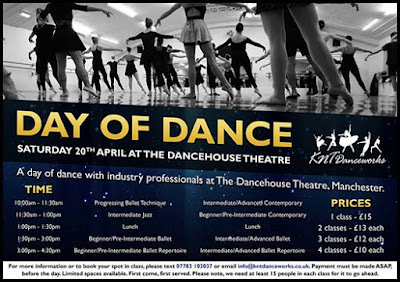 KNT Danceworks has held three Day of Dance events at the Dancehouse studios.  For a Day of Dance, Karen Sant hires guest teachers from the stage and leading ballet schools. She has brought us Harriet Mills, principal ballerina of the Karlsruhe Ballet, Alex Hallas of Ballet Cymru, Martin Dutton of the Hammond and other great teachers.  I have attended all three of those events.  They have all been good but, last Saturday's was perhaps the best one yet.

Ironically, I very nearly missed the event even though I had been looking forward to it from the day it had been announced.  That was because I could barely walk on Saturday.  My legs were like jelly - or rather melting sorbet - and I was stiff and achy in every single limb and muscle.  I could barely step into the shower.  How on earth was I to achieve ronds de jambe let alone grands battements?  Reluctantly I messaged Karen to say I was unlikely to make it.  Sympathetically she advised me to rest up.

So I abandoned plans to visit Manchester and settled in front of a computer screen to write about trade marks.   But then tweets and Facebook messages about the morning's sessions started to ping.  I thought about what I was missing.  I tried to put the Day of Dance out of my mind but I couldn't.   Even if I did not dance a step I still wanted to be at the Dancehouse.  I quickly donned some leggings and a leotard and set off for Manchester.  There was no way I could arrive in time for the 13:30 class but I could still make the 15:00 one.

I arrived at 13:45 by which time Amanda Van Hoof Gilliland would have been on glissés if not further into the barre.  She subsequently informed me that she would have let me join the class late.  I have done that with teachers I know but I had not previously taken a class with Amanda. In any case, arriving late is discourteous to other students as well as the instructor.  I waited in the cafeteria until the class was due to end before making my way to the studio where it was taking place in order to find my classmates.  I caught the last few minutes and could see it was good. Amanda received resounding applause at the reverence. I shall certainly look out for one of her classes in future.

The class that I did join was excellent.  It was given by Joey Taylor of the Birmingham Royal Ballet.  He taught us the Jack in the Box solo from the first act of Sir Peter Wright's version of The Nutcracker.  That is a production that I know very well.  I had last seen it at the Albert Hall just after Christmas with my former ward and her little boy, Vladimir, who are the nearest I have to a daughter and grandson. In my review, The Nutcracker returns to the Royal Albert Hall 30 Dec 2019,   I wrote:


"Each of the five largest ballet companies of the United Kingdom has a version of The Nutcracker in its repertoire. I have seen all of them at one time or another and the ones that I like best, which are Scottish, Northern's and the Birmingham Royal Ballet's, more than once. If I had to choose one it would be Peter Wright's production for the BRB."

Vlad loves ballet and The Nutcracker in particular.  One of the bits that he liked best was the Jack in the Box solo.  He applauded until the palms of his hard were sore.

It is a very fast piece.  It starts with 4 jumps followed by 4 grands battements then 4 sets back in arabesque, a soutenu, some spectacular tours en l'air,  then some steps to the left which I can't even begin to describe, a gesture to the children at Mr and Mrs Stahlbaum's party, a coupé, two cartwheels, a run around the stage, more jumps and finally a collapse into a box. It is over very quickly but requires a lot of energy and even more skill.  Needless to say, I did not achieve very much of that though I did do some despite the discomfort.  But several members of our group did manage more.  In particular, Christie Louise Barnes, who is a member of the cast of Powerhouse Ballet's Aria, performed some very impressive cartwheels.  I should add that she is one of the most congenial persons I know and working with her on the Aria project has been a pleasure.

One of the reasons why I had crossed the Pennines was to answer questions on the constitution and business plan for Powerhouse Ballet that I had drafted on Friday (see Please do not let Powerhouse Ballet wither on the Vine  20 April 2019 Powerhouse Ballet).  I have been running Powerhouse Ballet in my spare time meeting the odd expense here and there as and when it arrived which was fine for the first few months but not for the long term. Hopefully, we shall have an organization in place to take over the management of the company after 4 May 2019 when we make our debut at KNT's Tenth Anniversary gala.

I met lots of dancers from Powerhouse Ballet as well as the regulars from KNT.  They are the loveliest bunch of people one could ever hope to meet.  Karen once referred to us as "the KNT family." That's not a bad description.  I am so glad I made the effort to attend the Day of Dance on Saturday.
Posted by Jane Lambert at 08:09