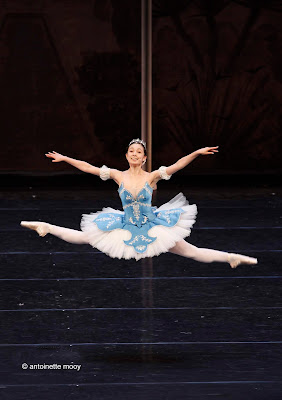 The performance took place in the principal auditorium of the Dutch National Ballet with the company's own orchestra under the direction of Matthew Rowe, its director of music. Seven works were presented:

I enjoyed all of those pieces, particularly Revelry. Ode aan Fred ("Ode to Fred") and Bolero.

If I understood the programme notes correctly, Meisner created Revelry for the 2017 gala for which I had been unable to get a ticket.  Set to Lowel Liebermann's composition of the same name  An infectiously exuberant work it is perfect for dance and particularly well suited for the individual personalities of the members of the Junior Company.  Guests arrive at a party and throw themselves into the celebration with gusto.  Clearly, they have a good time.  So much so that when the music ends the audience see each and every one of them prostrate on the floor.  This was the first time that I had seen Revelry but it is already one of my favourites.  It is a work that they could easily have taken to London last week and I am sure the audience would have loved it.

I am guessing that "aan" means "to" in Dutch.   When I saw Ode aan Fred  I thought this would be an ode to Ashton and that we would see lots of developpés, arabesques, pas de bouré and pas de chat.  In fact, this Fred was a well-loved instructor at the National Ballet Academy.  The music started with what sounded to me like didgeridoos and I wondered whether Fred Berlips was an Australian. On consulting the programme notes I found that the opening had been Andrea Geraks Jews Harp Music and that there was also music by Goran Bregovic. I understand from friends who know him that Berlips specialized in teaching younger students.  He was invited onto the stage for the curtain call and auditorium exploded in applause.  Meisner came on stage and made a short speech.  Berlips was presented with an enormous bouquet.  The affection for the man was palpable.

The last work was set to Ravel's Bolero and was quite different from Maurice Béjart's which I had seen at the Coli or the Wells many years ago. It began with a spotlit single dancer but in this version, it was a young woman on the floor.  The arc widened to reveal more women on the floor and then more. As the music gathered pace so did the dancers.  The stage cleared and another group of dancers performing ever more energetically than the last.   As the music reached its conclusion the stage erupted in colour and movement.   It was the perfect way to end a perfect evening,

The show started with Paquita cannot be the easiest work for students. It includes a pas de deux which requires a lot of lifting, some spectacular jumps and turns and 32 fouettés which seem to be at least as difficult as Kitri's in Don Quixote or Odile's in Swan Lake.  There were several difficult solo bits for both men and women as well as work for the corps.  In the absence of a cast list, I cannot identify the dancers otherwise than by the colours of their costumes but I have to commend Yellow for her jumps.  White, of course, was also impressive.

Set to Anthony Fiumara's haunting Aerial for piano and orchestra, Together(E) featured the academy's younger students.  The music reminds me of waves breaking on a beach and that was reflected in the precise movements of the students,   With its bar of red light and almost sculpted dancers, the hand of Wayne McGregor was unmistakable.   Another difficult piece which was executed well by the students.
Having seen Sense of Time in [Un]leasted just a few days earlier I was curious to see more.  Set to Simeon ten Holt's Canto Ostinato which is another work for a single pianist Made in Holland was a beautifully crafted work.

Meisner appeared on stage immediately after Paquita with the academy's business manager.  As his speech was in Dutch (a language I have never formally studied) I did not pick up every word but he explained that he was the artistic director and described the works that were to follow. He said that several of the pieces had been written especially for last Tuesday's show, that the programme included one of his own works and that Wayne McGregor and Didy Veidman had contributed works for the performance.  He also introduced the National Ballet's Orchestra and its illustrious conductor.  The manager mentioned the need for funding and tight management, He and Meisner had worked well together and he looked forward to their future collaboration.

I have made it my business to see student shows ever since 2007 when I saw Xander Parish and his sister Demelza and his sister steal a gala that included Marianela Nuñez and Samara Downs (see Charles Hutchinson Review: A Summer Gala of Dance and Song, Grand Opera House, York, Sunday 31 July 2007).  I have seen many great shows in that time but I think last Tuesday's was in a class of its own.
Posted by Jane Lambert at 13:17