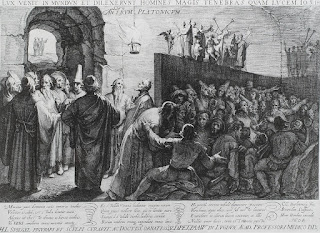 As I relished the pleasure of running and jumping on a sprung floor to the instructions of our esteemed teacher in the company of my dear friends and acquaintances I was reminded of a story that I first heard at the age of 8 when my father was taking a course at the LSE and using me as a sounding board.  It came from The Republic which I read for myself a few years later at St Andrews. In my day, all arts students at the ancient Scottish universities had to take a course in moral philosophy or logic and metaphysics. I chose moral phil which was easier for me than most because all students at independent London day schools had to learn some Greek.

Plato tells the story of a group of prisoners chained to a wall of a cave.  Behind them lies a flickering fire.  Occasionally things pass between the prisoners and the fire which the prisoners see as shadows projected on the cave wall.  Eventually, one of the prisoners broke free and saw the world in all its beauty.  He urged his fellows to follow him but they couldn't because the cave wall encompassed all reality.

Well, yesterday I escaped from online Zoom classes in my kitchen and pliéd (woodenly), pirouetted (scrappily) and grand jetéd (clumsily a half-second or more behind the others in my group) across Studio 2 of Yorkshire Dance.

I am going to stick with Bernstein rather than Plato because Plato told the story to flog his theory of form which led him to despise artists as copyists of copies of reality. What he would have made of ballet dancers I shudder to think - and amateur ballet dancers like me do not bear speculation.

Yesterday's class was one of the happiest of my life and indeed one of the happiest days of my life. Having cleared three score years and ten some time ago I had begun to see buffers and barriers which were always there but never noticed before. Having recently lost my footing to slide down a flight of stairs on my backside which was jolly painful, I seriously wondered whether I would ever be in class again.  That saddened me and it was one of the reasons why I had stopped blogging about dance for a while.

But I can still dance for now. Yesterday I was with beautiful young friends from all over England. In the studio Joanna from London and Sarah from Brum.  On the other side of the screen, Philippa from Dartmouth, Emmeline, Gerard, Anne and Mel.  All of us enjoying the music.  All of us moving.

Well, as you can see, I have started blogging again.  And what a time to begin.  My first articles will be about Carla Fracci (one of the greatest ballerinas of all time whom I was lucky enough to see in her most famous role) and the retirement of David Nixon (Northern Ballet's longest-serving director and in many ways the architect of the company's success).  The first live ballet I will actually review will be in Manchester Cathedral and the end of July.  One thing I really must do while I can still travel is to visit Moscow and St Petersburg and as many regional companies as possible.