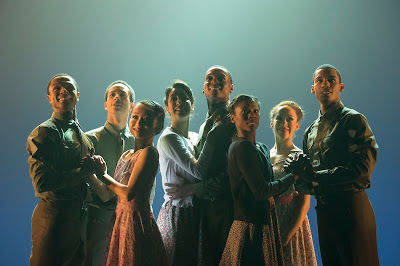 Writing in the Independent ("Dance review: Trouping the colour - Why Ballet Black puts on such a jolly good show" 9 March 2013) Jenny Gilbert opined:


"There should be no need for a company called Ballet Black, just as there should be no need for all-female political party shortlists. But there is, and for two reasons: to offer a platform for classically trained dancers of colour, particularly women, conspicuously absent from Britain's big ballet companies; and to provide role models for a rising generation of talented kids. But in the 12 years of Ballet Black's existence, it has found itself a third raison d'être. It's hard to think of another small company that even comes close to its turnover of new work."

I can think of a fourth reason and that is that there are some works that black dancers can do better than anyone else. I realized that when I first saw Dance Theatre of Harlem in London many years ago.

I have yet to see Ballet Black on the stage but I fell in love with the company just by watching this film of  Depouillage by Jade Hale-Christifi and Sarah Kundi on YouTube: Ballet Black, an associate company of the Royal Opera House, has just finished a successful season at the Linbury with a quadruple bill by Robert Binet, Ludovic Ondiviela, Javier de Frutos and Christopher Marney. The company is now taking the show on tour to Bracknell, Cambridge, Exeter and the Bernie Grant Centre in Tottenham. It has a school in Shepherd's Bush where the children are lucky enough to be taught by Cassa Pancho, the founder and artistic director of the company.

It is sad that the appearance of Tyrone Singleton and Celine Gittens in Swan Lake made news not just for their virtuosity which is self-evident but for their ethnicity (see "Birmingham Royal Ballet to make history" ITV website 4 Oct 2012) but that will change as the kids from Harlem, Shepherd's Bush and indeed Nairobi  come on stream.


Apparently it costs £350,000 a year to run Ballet Black and any donation of WHATEVER size can make a difference to the future of the company, whether it's £1 or £1000. The company emphasizes that any support we the great British public can offer will be greatly welcomed.