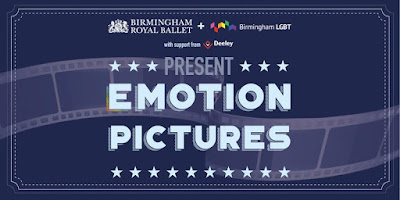 Shortly before England faced Sweden in the quarter finals of the World Cup members of Birmingham LGBT staged a choreographic work called Emotion Pictures at the ACE Dance and Music Studio in the Birmingham inner city district of Digbeth.  Given the timing of the event and the location of the studio a very small audience indeed might have been expected.  Instead, a more than respectable number turned up including at least two of us from Yorkshire.  We clapped and cheered enthusiastically at the end of the performance because it had been a good show.  I was particularly impressed on learning that it was the first performance in public for many of the dancers.


"Three months ago, Birmingham LGBT partnered with Birmingham Royal Ballet for the Move in Movies programme, a 12 week-long dance participation project for LGBT people. Under the direction of professional instruction from staff members of BRB, participants would be offered the chance to learn dance (across all areas – not just ballet), and contribute to a production (lightening, costume and composing), as well as gaining experience in putting on a dance-piece performance for members of the public."

The choreographers, Jenny Murphy and Fiona Potts, created a 45 minute work inspired by movies that had impressed those taking part in the project. These films included Metropolis, Death in Venice, Titanic and The Greatest Showman.

The performance began with a slide show of the dancers followed by a short speech from the presenter and then different dances for different films starting with the automaton like movements of the inhabitants of Metropolis. Considering that many received only a few weeks of dance training I was amazed by the achievements of many individual performers.  In particular, one of the men towards the end who executed a tricky tour en l'air as well as other difficult jumps and turns.  As I had met only three of the performers before the show it would be invidious of me to single any of them out any of them by name for special praise.  They all danced well and I congratulate each and every one of them.  I also commend those who designed and made the costumes and provided the lighting.

The department of Birmingham Royal Ballet that partnered with Birmingham LGBT are called Ambassadors.  They are described on the BRB's website as a group of young people who have worked on past projects with the Company and now aim to pass on their skills and experience by supporting other young people taking part in new projects.  Several were in the studio wearing distinctive back t-shirts.

The audience were welcomed to the studios with soft drinks, fresh fruit and other refreshments and invited to stay behind for discussions after the show.  A large flat screen TV was set up for those who wanted to watch the start of the football.  After we had consumed all the food and drink I was invited with other members of the audience to join the cast party at a local bar with concessions that served all sorts of exotic street food.   There was no telly but we were kept informed of the progress of the match from ecstatic cheering from the rest of inner city Birmingham.

I saw a good show, met some interesting people in very convivial circumstances, explored a bit more of one of our nation's great cities and renewed a couple of longstanding acquaintances.  Not a bad way to spend quarter finals match day.