According to The Guardian's University League Table for 2019, St. Andrews lies # 3 in the nation. A mere 2.8 points behind the leader, Cambridge, 0.2 of a point behind Oxford which is #2 and almost 10 points clear of Loughborough which is #4.  Now I know that there are other league tables and in any case one should never believe everything one reads in newspapers but there is no denying that St Andrews is what Americans would call "a good school". It is not easy to get into St Andrews and students have to work very hard once they are there.

It is all the more remarkable that many of those students find time to dance between handing in essays or laboratory work. "Ballet," as the wise teacher who led me back to ballet once said, "is a jealous mistress who is out to see you fail". Dancers have to put in the hours to see that they don't.

I danced when I was at St Andrews. In fact I was one of the founder members and first secretary of "Dance Soc" as we used to call it.  I danced then for the same reason that I dance now.  It helped relieve the pressure of a heavy workload. Then it was essays.  Now it is pleadings, opinions and court work. I don't think I could have endured the pressures then without my weekly class with Sally Marshall in the Athletics Union on the North Haugh and I certainly couldn't do so now without my Tuesday evening classess with Karen Sant in Manchester or my Wednesdays with Jane Tucker in Leeds.

Last month I returned to St Andrews to watch the Dance Club's 50th anniversary gala.  I was impressed by all the pieces but there were several that were particularly interesting.  They included the intermediate ballet class's combination of ballet and Bollywood.  In my review, St Andrews University Dance Club's 50th Anniversary Gala 5 May 2018 I wrote:


"I should add that I loved all the ballets and, in particular. Ailsa Robertson's setting of Colour of Love to the Bollywood film song Gerua. It was an ingenious juxtaposition of two art very different art forms that worked brilliantly."

Colour of Love has been uploaded to the Dance Club's YouTube channel together with videos of much of the rest of the show. If, like me, you had never heard of Highland Fusion before then take a look at "From Here On In".  It is very beautiful.  Not a bagpipe in earshot nor a tartan in sight and just look at those gorgeous costumes. There is a lot of other good stuff up there "so feast your eyes" as they say in Australia where Fiona, the teacher who led me back to ballet, learned her skills. 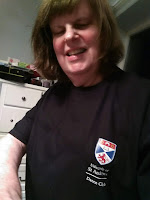 To celebrate the 50th anniversary (more or less) of its formation, the Dance Club procured these anniversary t-shirts two of which arrived through the post a few days ago. They were a gift from my friend, a distinguished Scottish lawyer, who also attended the anniversary show.  I wore one of them proudly to Move It at the Dancehouse in Manchester on 19 May 2018 which I mentioned in The Importance of Performance 20 May 2018 and the other at Ballet West's Showcase in Stirling on Sunday.

Dance was not formally on the curriculum when I was at St Andrews but it was certainly one of the most useful things that I learned there.
Posted by Jane Lambert at 08:25