In March I saw Shobana Jeyasingh’s Bayadère – The Ninth Life at The Linbury. Jane reviewed the show for Terpsichore in La Bayadère - The Ninth Life 29 March 2015. The piece started with an Indian blogger writing about a performance of La Bayadère the night before. He wasn’t too impressed by the ballet and I got the impression from her video that neither was Shobana Jeyasingh. So I didn’t expect much when I turned up at The Coliseum last Sunday to see St Petersburg Ballet Theatre’s performance of the ballet.

I was very pleasantly surprised. I loved the score, costumes, sets and choreography. It was not a very pleasant story but not so very far out that one could say that sort of thing could never happen in India. The drumming dance in the divertissements was spot on as was the way some of the women moved. The set for the rajah's palace in the second scene of Act 1 reminded me of some of the palaces and maharajahs' homes that I had seen on a recent visit to Rajasthan. There were some things that the company did not get right. The brahmin's costume for example. Brahmins rarely wear red which is a bridal colour. They are more likely to wear white and only very occasionally a red scarf.

There was some great dancing by Denis Rodkin as Solor but that was to be expected from a principal of the Bolshoi. I was also impressed by the St Petersburg Ballet Theatre’s dancers, particularly Irina Kolesnikova as Nikiya, Natalia Matsak as Gamzatti, Andrei Federkov who danced the bronze idol and Miho Naotsuko who was one of the lead shades. Naotsuko was the woman of the match so far as I was concerned.

I thought the ballet took its time to get going but it certainly had some action in Act III. I was mesmerized by the descent of the shades, thrilled by Rodin and Kolesnikova’s pas de deux and the lead shades’ solos at the end and the bronze idol divertissement. I don’t know why we don't see this ballet more often because it is one of the most exciting I have ever seen.

The audience loved the show. One chap threw some carnations on to the stage which were gathered up by Rodkin and presented to Kolesnikova. These were followed by the more formal bouquets for the principals from the management. Then more flowers from the flower thrower. Rodkin picked up one of those bouquets and tossed it deep into the auditorium. I clapped vigorously but from my seat. I wish I had stood up and given them a standing ovation.

I was uplifted as I entered St Martin’s Laine in the late summer sunshine.

Here is a heavenly recipe collection for potato and cashew nuts with a cool cucumber raita to honour the shades which you may like to try . 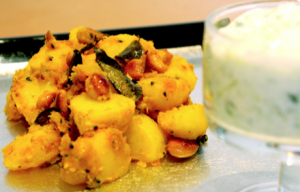 Preparation
Peel and chop the potatoes into chunks and part boil in salty water for 15 mins. Set aside.

For the raita
Crush the garlic, finely chop the green chilli and grind the mustard seeds in a pestle and mortar.

Heat 2 tablespoons of oil in a Lowu or shallow level pan, lightly fry the cashew nuts, cumin seeds and add the limes leaves and stir.  Now add in the ginger and whole green chilli.

Add the potatoes and sprinkle in the onion seeds, paprika, chilli powder, dried coriander, salt and turmeric. Give it all a good stir and cook on a medium heat for 2-3 mins, add in the lime zest and lemon juice. This brings out all the flavours. Finally, after a good stir sprinkle over the chives.

For the raita
Add to grated cucumber: the yoghurt, garlic, chilli, and turmeric and give it stir. Add salt to taste and mix in the crushed mustard seeds.

Finally enjoy this video of Kolesnikova's solo towards the end of Act II.
Posted by Gita Mistry at 13:59