When I first fell in love with ballet in the late 1960s and early 1970s there were some great male dancers in the Royal Ballet such as Anthony Dowell, Rudolf Nureyev and David Wall. Sadly the last of those three died yesterday (see "Ballet dancer David Wall dies aged 67" BBC 19 June 2013). 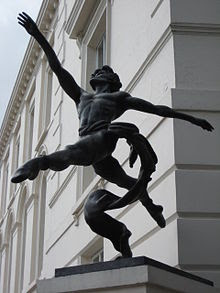 In the obituaries and news reports that I have seen today Wall is remembered for partnering Margot Fonteyn  but he also danced with the other great ballerinas of the day. My memory of him is dancing Romeo with Lynn Seymour and fortunately someone has posted a clip of the bedroom scene from Romeo and Juliet on YouTube. No doubt a lot of people like me will watch that pas de deux with glistening eyes.

I learned something new today from Wikipedia. The sculpture to the left which we have seen so many times is apparently based on David Wall.  It is called Jete and it is by Enzo Plazzotta. I shall now remember that wonderful principal every time I pass it.

Last Thursday, in the second interval of the transmission of Swan Lake, Valery Gergiev described Tchaikowsky as the greatest ballet composer ever. A lot of folk would go along with that including me but Aaron Copland is not far behind. Copland, unlike Tchaikowsky, can bring tears to my eyes. One of my favourite ballet scores is Appalachian Spring. It was commissioned for the great Martha Graham and Merce Cunningham in 1944.  I have never seen that ballet on stage but here is the next best thing: some remarkable footage of the original production shot without sound upon which the music has been overlaid.

I heard that score again and was close to tears last night in Mark Godden's "Angels in the Architecture" danced by Northern Ballet as the first part of their Mixed Programme at the Stanley & Aubrey Burton Theatre.  Although Godden's choreography is very different his subject matter is the same, namely the pioneers of early America.


'Tis the gift to be simple,
'tis the gift to be free,
'tis the gift to come down
where we ought to be,
and when we find ourselves in the place just right,
'twill be in the valley of love and delight.
When true simplicity is gained
to bow and to bend we shan't be ashamed,
to turn, turn, will be our delight
till by turning, turning we come round right."

Godden's work focused on the Shakers, a sect which is now almost extinct. I am sorry they have gone because they seem to have had much in common with Quakers. Like us they adhered to pacifism, integrity and simplicity.  A manifestation of their integrity and simplicity is the elegant furniture that they produced and it was that rather than Frank Ticheli's score which inspired the title.  According to the programme the title  alludes to a quotation by Thomas Merton that "the peculiar grace of a Shaker chair is due to the fact that an angel might come and sit on it."

Comparing the film of Appalachian Spring to a clip of Ballet Memphis's production of Angels you can see the similarities in the sets, the props, the costumes and even the choreography. Graham waved the long skirts of the female dancers sexily which Godden extended into a sort of 17th century cancan. I am not sure that the pioneers would have done that - particularly not the Shakers who encouraged abstinence even though they had a reputation for wild and exuberant worship - but it worked balletically.

The dancers were Pippa Moore, Ashley Dixon, Martha Leebolt, John Hull, Teresa Saavedra-Bordes, Graham Kotowich, Rachael Gillespie, Matthew Topliss, Mariana Rodrigues, Sebastian Loe, Abigail Prudames and Matthew Broadbent.  Interestingly Godden collaborated with Paul Daigle to design the set which was woven into the choreography as were Daigle's costumes. Perhaps all choreographers try to do that but this was hands on.

The audience was on a high after Angels. We were brought down to earth with a thud by the opening bars of Ólafur Arnalds  "Brotsjór" in Kenneth Tindall's "Luminous Jun-cture" and the stiff arm and deathly w,hite face of (I think, apologies if I got it wrong) Victoria Sibson poking through the curtain. A very interesting score which also incorporated "Recomposed", "Luminous" and "Sarajevo" by Max Richter and Hans Zimmer's "Time" overlaid by a diatribe against greed and war that I just can't place for the time being. The other dancers in Luminous Junc-ture were Dreda Blow, Julie Charlet, Hannah Bateman, Tobias Batley, Benjamin Mitchell, Kevin Poeung, Giuliano Contadini and the lighting.  I say the lighting because Tindall wrote:

"My inspiration is always movement in its style and intention. I hope to use the lighting as if it were another dancer on the stage. That, coupled with the music, will help Luminous Junc-ture be a physically emotive, inventive and atmospheric work."

And so it was. He did indeed make clever use of the lighting not only to track movement but also as a prop. The descending light fittings at the end were a good example. You can see some of the choreography from the rehearsal tracks on the ballet web page.

A special word for the young costume designer Emma Guilfoyle who has a special YouTube clip that can also be accessed from the web page. Her costumes gave the work a retro-feel - something that might have been performed by Michael Somes, Moira Shearer or Pamela May immediately after the second world war - and the voiceover was definitely 1940s. No bad thing as the war was the cauldron in which modern the British ballet was forged.

The last work in the triple bill was Hans van Manen's classic Concertante. What can one say about a masterpiece? Especially when there is a YouTube video of the great man himself discussing his ballet. According to the clip van Manen staged the work for the Nederlands Dans Theater junior company (Dans Theater 2). He spoke very highly of the Leeds dancers (Bateman, Batley, Leebolt, Contadini, Lori Gilchrist, Nicola Gervasi, Prudames and Isaac Lee-Baker) as well he might for they were good.

This was my first visit to the Northern Ballet's new home and I was very impressed. Being a Mancunian I regretted their departure from my hometown but I can see they have a good home now with a well equipped theatre with most of the things that a company could possibly need. But I am sure they could do with some more.  There are many ways you can help them.   For instance, you could become a friend or patron, you could sponsor a dancer, run with the Northern Ballet on Bastille Day or, indeed, you could sponsor my long suffering dance teacher who is taking part in the run.

High definition television has created new opportunities for theatre and music lovers in outposts like Holmfirth to see the world's great opera, ballet and theatre companies without the expense and inconvenience of traipsing down to London - or indeed other metropolises such as St. Petersburg and New York. Doubtless it has also created opportunities for those companies to develop new income streams and indeed new audiences.

Over the last 12 months I have watched performances of the Bolshoi and the Met streamed live from Moscow and New York to the National Media Museum in Bradford (a great national asset threatened with closure that we really must save), the Royal Ballet's Nutcracker in Wakefield and, yesterday, the Mariinsky Ballet in Swan Lake in Huddersfield.  It is not the same as watching the companies on the stage.   As Tamara Rojo said when interviewed on BBC Radio's Broadcasting House just before Christmas "It's a different experience." But not necessarily an inferior one.  The cameras go where audiences don't such as the orchestra pit when the maestro waves his raises his baton or in the case of Valery Gergiev his hands. They interview the stars and, in some cases, the composers, conductors, designers, directors and technicians behind the production which provides valuable insights not only into the show but also the work. The New York Met deserves particular commendation in that regard.

Yesterday the ballet was streamed to some audiences in 3D. I got to see it in 2D but that was still good enough. The transmission opened with an interview with Gergiev and Yekaterina Kondaurova (Odette-Odile) from the new Mariinsky about which I blogged last month.   The ballet was danced on the original stage but an audience in the new auditorium watched it in 3D. It is a rare pleasure to hear a ballerina speak, especially Kondaurova who has a good command of English.   The transmission then switched across the road to the Mariinsky foyer where Yorkshireman (not everybody and everything of value in British ballet comes from London, Cheryl) Xander Parish was interviewed.  He danced one of Siegried's friends.

The Mariinsky had rolled out its top team for the world's admiration.  Kondaurova was magnificent as was his partner Timur Askerov. Odette-Odile is a split role requiring considerable dramatic as well as balletic skill to transform from sweet swan to shameless imposter. Not every ballerina can combine those roles but Kondaurova is one who can. My favourite bit of any Swan Lake is Legnani's 32 fouettés and Kondaurova executed them exquisitely. Special praise also go to Vasily Tkachenko who danced the jester. The Mariinsky has produced the legendary male dancers Nijinsky, Nureyev  and Baryshnikov.  In Tkachenko I think we will see another.

Having been brought up on the Royal Ballet's version I missed Fred Ashton's charming Neapolitan divertissement but the end of the Mariinsky's Swan Lake was so much more satisfying than most versions.  Instead of the lovers jumping into the lake and sailing off to Heaven Siegfried tore a lump out of Von Rothbart (danced brilliantly by Andrei Yermakov) who writhed convincingly on the floor as the swans broke free.

St Petersburg is one of the great cities of Europe I have still to visit and the clips of the city in the two intervals were stunning. "We have to go there" I whispered to my foodie friend.  And although borsht isn't doesn't appeal to either of us are now saving our pennies to see Theatre Square for ourselves.
Posted by Jane Lambert at 07:01 No comments: