"How can they stop us taking videos with our phones?" I overheard one member of the audience ask in The Lowry recently? "Well there is the law of trespass for a start" I nearly told her. "You're only allowed into this place on conditions and one of those conditions is that you don't make a thundering nuisance of yourself. Or I could have told her about performers' rights, the right of a performer (which includes a dancer) under s.180 (1) (a) of The Copyright Designs and Patents Act 1988 to object to the exploitation (which includes filming and taping) of his performance.

Before I started this blog I used rights in performances as an excuse to indulge my passion for ballet in my intellectual property titles. I reviewed the Northern Ballet's performance of The Nutcracker in "Cracking Nuts - Copyright in Choreography" IP North West, 24 Nov 2011. In it I discussed Massine v De Basil [1936 - 1945] MCC 233.which is quite an important case on non-literal copying and title. I have referred judges to it more than once in software disputes.

Then in "Ballet and Intellectual Property - my Excuse for reviewing 'Beauty and the Beast'" I reviewed Northern Ballet's Beauty and the Beast in my IP Yorkshire blog a few weeks later. I pushed my luck again in "Northern Ballet's Ondine" in the same publication on 11 Sept 2012.  And earlier this year I gave my dance school a plug in "Interesting Yorkshire Businesses No. 1: The Base Studios Huddersfield" on 11 Jan and "Huddersfield Youth Dance Academy Auditions 26 Jan 2013" and 18 Jan 2013.

Now some lawyers and intellectual property owners like ballet. As I said in "From Bar to Barre" 20 March 2013 there are links between those two worlds. It was through looking for a parking space one Saturday afternoon when Floral Street was packed that I discovered Lincoln's Inn Fields and hence Lincoln's Inn. But most do not. And for those who know little about ballet and care even less my reviews were something of a turn off.

"Now then lass" protest my clients. "We've seen thee make a fool of thou's ane attempting pliés and tendus in t'Base but we can only laugh so much. So do us a favour and keep it to tha' self." So I did and hence this publication.

Now as I have probably upset all my balletomane readers by rabbiting on about the law I have inserted this clip from the TV series "Rumpole of the Bailey". It has nowt to do with ballet but it is very funny. I hope you enjoy it.
Posted by Jane Lambert at 09:13 No comments:

Email ThisBlogThis!Share to TwitterShare to FacebookShare to Pinterest
Labels: intellectual property, Northern Ballet, Ondine, The Base, The Lowry, The Nutcracker


Ballet Cyrnru is based in Newport which became notorious for a Jay Z take-off that many thought was better than the original. Of course, there is more to Newport than that.  It is the home of the Swyddfa Eiddo Deallusol ("Intellectual Property Office" to you sunshine) which keeps me busy. It also has The National Roman Legion Museum at Caerleon, one of the best archaeological museums in the country. It has a castle, cathedral, a university campus and curious bridge called The Transporter.  And of course, the ballet company.

The company has just produced a new version of Romeo and Juliet (or "Romeo a Juliet" as it prefers to call it) which will be premièred at the Riverfront Theatre in Newport on 3 May and then go on tour.  Appropriately their first port of call outside Wales will be Cumbria and Ayrshire where Welsh was once spoken.

I shall try to catch up with them at The Brewery Arts Centre in Kendal where they are performing on the 11.  I shall let you know how they get on.
Posted by Jane Lambert at 20:18 No comments: 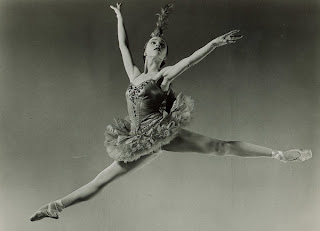 In my article on Olga Preobrajenska on 31 Mrch 2013 I quoted my friend Pamela Newton who recalled the visit of Maria Tallchief to the Salle Wacker. She recalls Tallchief's beauty.

I had intended to feature Tallchief's life and work in this blog as one of the greatest living ballerinas but I am sad to report that she died on Thursday.

In its obituary published today the New York Times described her aptly as "one of the most brilliant American ballerinas of the 20th century,"  With the greatest respect to Jack Anderson who wrote this piece, I would remove the adjective "American" and substitute "in the world's".after "ballerinas" I never saw Tallchief on the stage but I did see her company and dancers who performed her roles who had been inspired by her.  Anderson quotes the choreographer, Jacques D'Amboise:

I will write more about her life and work soon.

Lorraine Watson has kindly drawn my attention to this YouTube video of Maria Tallchief in George Balanchine's Firebird.  Her comment: "so beautiful".
Posted by Jane Lambert at 10:59 No comments:

Last year he came home last year to carry the Olympic torch. In one of the YouTube films he wears a Team GB shirt which I am sure would have gone down very well in the country that was beaten into fourth place in the medals table.

Training in Russia does not come cheap so if you want to invest in developing a very rare talent here is your opportunity.

Being a Lancastrian I am brimming with pride. I wish him all the best.
Posted by Jane Lambert at 21:15 No comments:


This short video from today's New York Times tells the story of the closure and revival of the Dance Theatre of Harlem.

I first saw this company when it performed at Covent Garden over 30 years ago and fell in love with it.   I was deeply saddened when it had to close its doors in 2004.  I am overjoyed that it is coming back to Lincoln Centre with a programme that includes Balanchine's Agon. With ticket prices ranging from US$25 to $125 I urge my US readers (and anyone else who can spare the time and cash for a flight to New York) to see them.

Their stars include Michaela DePrnce, an exciting young dancer who is not yet known in this country, about whom I blogged on Friday ("Michaela DePrince" 4 April 2013).

Like so many businesses in Silicon Valley this wonderful company was started in a garage.  Maybe I should clear out mine.
Posted by Jane Lambert at 11:18 No comments:

Why can't I be nicer to Matthew Bourne? .

I have mixed feelings about Matthew Bourne. He has won so many awards. His ballets are dramatic. His choreography spectacular.  I have seen Cinderella and Nutcracker as well as Sleeping Beauty.  Two of those performances were at the Alhambra and the third was at the Wells.  On each occasion the crowd went wild.  And the crowd is part of the ballet.  And yet......

The trouble is that one can sometimes be too clever by half and Matthew Bourne is very, very clever. He knows how to raise a laugh from the audience with the puppet baby Aurora.  And then to make them shiver as she climbs the curtain.  Brilliant! But is it ballet?

Well in a sense yes. There is Tchaikovsky's score.  The ballet opens with the Princess Aurora in her cradle in 1890.  An homage to Petipa since that was the year of the première in St. Petersburg.   It continues with her coming of age, awakening and wedding.

But there was no Puss in Boots.  No Bluebird.   No divertissements at all in fact.   I missed them so much and I can't wait until I see them again which will probably be the Birmingham Royal Ballet's Beauty at The Lowry

No Lilac Fairy though there was a Count Lilac powerfully danced by Christopher Marney.  There was a Carabosse but she died and left a son called Caradoc.   There were suitors called Rupert and Aubrey, tourists and as for the wedding .........blah!.

But the dancing was spectacular which is why Bourne packs in an audience even in Bradford which can't be bad.

So why can't I be nicer to Matthew Bourne?
Posted by Jane Lambert at 16:55 No comments:

Readers of this blog will have guessed that I love Africa which is why I wrote about Anno's Africa work in the rough neighbourhoods of Nairobi in "What can be achieved by a good teacher". Some might even have guessed from my clip of Lady Feli in "Happy Mother's Day" that I have a connection with Sierra Leone.

The reason I love Africa is that my late spouse came from Sierra Leone which is one of the smallest and poorest countries on that continent.  I visited Sierra Leone in 2007 when it was still recovering from a vicious civil war. The people there the kindest and most courteous that I had ever known. However, the massive number of young people missing an arm or a leg in Freetown indicated that at least some Sierra Leoneans were capable of the utmost cruelty.

Imagine my delight when I read "The Unstoppable Ballerina: A young dancer’s journey from Sierra Leone to the heights of American ballet" by Malcolm Jones in The Daily Beast of 2 April 2013. This is article about Michaela DePrince.  This young woman is not just a promising dancer plucked out of Africa.  She is clearly exceptional.   As Jones says in his article:


"In her 18 years, Michaela has experienced more than most people do in a full lifetime. Dancing since she was 6, she won a scholarship to the Jacqueline Kennedy Onassis School of the American Ballet Theatre after competing against 5,000 other young dancers in the prestigious Youth American Grand Prix, an annual competition showcased in the acclaimed 2011 documentary First Position. One of six aspiring dancers the film profiled, Michaela, then 14, supplied the most heart-in-throat moments when she stubbornly danced through a case of tendonitis that threatened to kill her career before it even started."

I have Googled DePrince and found her website which is full of lovely photos. I can't wait to see her in England.

I know a little boy in Thamesmead who is half Sierra Leonean and half Ghanaian who knows nothing of ballet but can rotate his legs and perform perfect sauté and almost an arabesque quite naturally. I am trying to persuade his mum to let him take lessons.  Up to now she has been sceptical but perhaps DePrince's example will help change her mind.

Update
5 Oct 2013  DePrince is now with the Junior Company of the National Ballet of the Netherlands which is a lot closer than New York City (see "No Holds Barred" 4 Oct 2013).
Posted by Jane Lambert at 18:36 No comments: