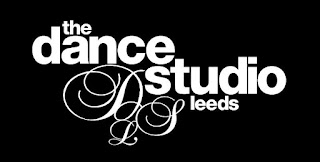 Quite a few changes seem to have occurred since my last class at these studios the most important of which is that Dance Studio Leeds has acquired more space.  We danced in a rather more spacious studio where there was definitely room to swing a cat or possibly even a young leopard if one were so cruel or imprudent. More importantly, there was more than enough space to get airborne in the last exercise of the evening.

Yesterday's class was taken by Katie Geddes who had taught me last year. I am used to her teaching and respond to it well. There's a quality in her voice that encourages me to dig deep even when muscles begins to ache and I feel I can go no further. We did all the usual barre exercises: pliés, tendus, glissés, fondus, ronds de jambe, developpés, grands battements and échappés facing the barre.

We put away the travelling barres and after another glissés exercise in the centre we practised an expressive port de bras and then an enchainment involving a chassé, attitude and a rather tricky turn. I did not find it at all easy though I am sure everyone else did and I was definitely flagging towards the end of the class, but Katie rehearsed us several times until she was satisfied that we had taken it as far as we could.

The last exercise was jumping which I like. We started with simple sautés in first and second, then échappés and changements and finally petits jetés. We continued with glissades and jetés.  Finally, grands jetés across the studio. The bit I like best.

There were several new faces in class last night but also some familiar ones including a member of my evening class at Northern Ballet. It is a very friendly studio and I was made very welcome. I wish I could attend this class more frequently.

The studios are located in Mabgate Mill just outside Leeds town centre. Classes still cost £6.50. Some parking space has been sacrificed for boxes containing flower beds in the centre of the mill courtyard but it is still easy to park in the evenings. All other details are on the Terpsichore Yorkshire page
Posted by Jane Lambert at 18:08