More than a Bit Differently: Ballet Cymru's Workshop and the Launch of the Powerhouse Ballet Circle 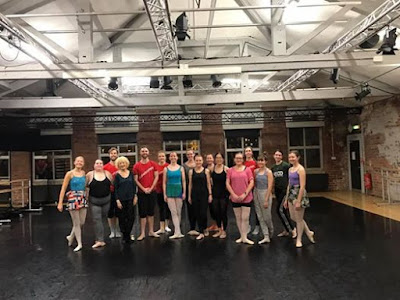 "We are a ballet company who like to do things a bit differently", proclaim Ballet Cymru on their home page.  "We enjoy finding new ways to make what we do exciting, innovative and relevant." They can say that again. Last night's workshop at Yorkshire Dance was one of the most challenging but also one of the most enjoyable balletic experiences since my first plié at St Andrews Dance Society over half a century ago.

It started off like any other ballet class with a walk around the studio except that we had to make and maintain eye contact with each other. The walk quickened to a trot and then a tennis ball was introduced which we had to catch and throw to one another.  Dan Morrison  and Robbie Moorcroft who led the exercises conducted the pliés, tendus and glissés in the centre and not at the barre. We did a few unusual exercises. For example, teaming up in pairs we pulled and pushed against each other to create support.

The first hint that we had to use our brains as well as our bodies came in the port de bras.   We were led gently enough through bras bas, first, second, thord and fourth,  "Now it is for you to decide what comes next," said our mentor. In other words we had to choreograph the rest of the phrase.  The obvious continuum for me was arms in fifth, rise and soutenu but others who included Fiona, the teacher who led me back to ballet nearly 50 years after that first plié, were much more ambitious. Dan and Robbie asked us to add steps and I tried an ababesque which is never a good idea with my sense of balance and excess weight.

About hslf way through the workshop the members of the company played an extract of the score of the company's new ballet, Dylan Thomas – A Child’s Christmas, Poems and Tiger Eggs.   Cerys Matthrews was reading ome of Dylan Thomas's poems - not one I know - about the thoughts that come to mind when waking with a start in the middle of the night.  The company demonstrated the way they had interpreted that poem.  Each dancer expresssed it differently.  It was now our turn and we each worked at it independently and in groups.  Members of the company circulated and helped us polish the piece. Beth Meadway worked with me. I couldn't quite manage the elevation or coordination for a cabriole so she suggested a temps levé instead.   In the last few minutes each group danced what it had learned to the other group and the Ballet Cymru dancers.   It was an unmissable experience.

But the evening did not stop there for Darius James and Ballet Cymru were the first guests of Powerhouse Ballet Circle.  We met in Martha's Room where we had laid on some drinks and nibbles. The Martha after whom the room is named is of course Martha Graham.  After our members had introduced themselves to members of Ballet Cymru and we each had a glass in our hands I interviewed Darius just as they do in the Civil Service Club in London.  "Croeso i Sir Efrog a Powerhouse Ballet" I said in my best Welsh. Happily, Peter, Alicia, Zoe and Holly were not there to correct me. I asked Darius about his career, what brought him into dance, his training in Newport and at the Royal Ballet School, his time at Northern Ballet (or Northern Dance Theatre a it was then called) and the ahievements of Ballet Cymru since he set it up in 1986.  Not much happened in the performing arts in Newport in the early days but now there is a lot thanks to the Riverfront Theatre on the banks of the Usk. I invited questions fropm the floor. Amelia asked about costume and set design and Sue about how Darius rated Powerhouse Ballet.   There were also questions from Miguel Fernandez and Krystal Lowe of the company,

Even thouigh I had a lot of last minute cancellations owing to illnesses and probems on the railways as well as other glitches both the workshop and the launch of the Powerhouse Ballet Circle went well.  The London Ballet Circle has a very close link with Ballet Cymru and we hope to do so too.  Our next guest is likely to be Yoko Ichino who has accepted our invitation in principle and I will advise members of the date and venue sooon. I also hope to arrange visits to schools and companies in the region and then, maybe, a trip to Newport.  At its 70th anniversary celebrations I learned that Dame Ninette de Valois regarded the London Ballet Circle as part of a tripod of achievements of equal importance to her company and school. I hope that Powerhouose Ballet Circle will be similarly supportive of dance in the North.
Posted by Jane Lambert at 10:20