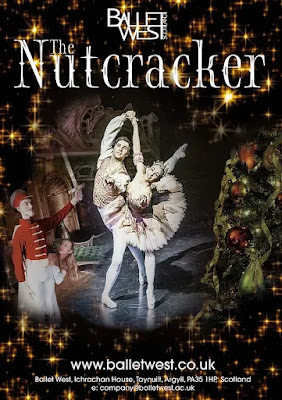 Ballet West is a ballet school on the outskirts of a little village not far from Oban.  Every winter it tours Scotland with a full-length ballet to give its students stage experience.   This year it offers a new production of The Nutcracker.   I have been following Ballet West for nearly 6 years and I have seen at least one performance of every show that it has taken on tour.  I  say without hesitation that this is the company's best show yet.  I add that I don't think I have ever enjoyed a performance of The Nutcracker as much as tonight's.

The production is an original interpretation of Hoffmann's tale of The Nutcracker and the Mouse King that nevertheless remains true to the story.  The Stahlbaums' house is set by a lake in the country rather than in a town in Germany. Some nifty computer-generated graphics take the audience inside where we see falling snow through the windows. There Mr and Mrs Stahlbam (Alex Hallas and Hannah Tokely) with their children Clara (Michaela Fairon) and Fitz (Luciano Ghidoli) receive their guests who include Ballet Cymru's Miguel Fernandes. The most important guest is, of course, the conjurer, Drosselmeyer, danced impressively by second year student, Rahul Pradeed.  I noticed that young man for the first time last year and I am convinced he is going places.  Another impressive character dancer was the grandmother, Lauren Pountney-Barnes.  She grabbed Fritz by the ear, patted Clara on the head before performing a spirited solo before the guests and collapsing in a heap. A small role, maybe, but an important one that has been performed by the likes of Marion Tait and Hannah Bateman in other productions.

A detail of a previous version of The Nutcracker which seems to be unique to Ballet Weast is the furtive dram taken by the servants after the Stahlbaums have taken to their beds.  I was delighted to see that Daniel Job, who has staged this work, has retained that detail in the new production.  They assemble around the butler glass in hand. Like traffic drill, they look to the left, then to the right and even to the ceiling before downing their bevvy.  I don't know why because that scene could occur anywhere but it just seems so Scottish - like the children dancing around their patents as in an eightsome reel.  Yet another fragment of the former production that has been preserved.

It is in the fight scenes of act I that the computer-generated graphics come into their own. Toy soldiers descend from the sky by parachute.  An intrusive rodent with the word "PRESS" on its back takes photos of a dying murine. The artist who designed those graphics is a genius.  I wonder how long it will take for Sir Matthew Bourne or someone like him to snap up that animator.  "Never," said the director with the force of the late Sir Ian Paisley, "we're keeping him" and I fervently hope they do.

The first act concluded with a delightful pas de deux by Hallas who had morphed from Clara's dad into the snow king and Natasha Watson, his queen.  The recording that Ballet West used for their show made better use of the choir than in most productions. The voices seemed to linger to the very end of the snow scene which I appreciated.  I left the auditorium at the interval grinning like a Cheshire cat. The director and Mr Job could see from my face how much I had enjoyed that act.

The kingdom of the sweets is very saccharine with representations of lollies and bonbons in most productions.  However, "sweet" can have a figurative meaning and it was the figurative meaning that the designer seems to have had in mind for this work. The backdrop was more Far Pavilions or Shangrila than Willy Wonka or the witch's hut in Hansel and Gretel.  The usual divertissements - the Spanish, Arabian and Chinese dances representing chocolate and tea followed by Cossacks, mirlitons and flowers - were performed with verve.  There were also new divertissements that gave Sara-Maria Barton's associates a chance to shine. One divertissement was performed by some very young kids but they were kids who knew how to hold an audience.   Three, in particular, dazzled us with their acrobatics.  In previous productions, there had been a scene for kids called "Mother Ginger".  She has been dropped from this version and I doubt that the show has suffered from her absence in the least.

The highpoint of the ballet is the pas de deux by the sugar plum fairy and her cavalier.  It is the bit that audiences remember and it is the yardstick by which some print critics seem to rate a Nutcracker.  Those roles were performed by Lucy Malin, another student who impressed me last year. and Maxine Quiroga. They were magnificent. They were exciting to watch. They justified my trip to Scotland.  Those folks are seriously good. They deserve to go far.

This is a short season and the students never stray furth of Scotland.  If you want to see them - and if I were looking for dancers I would want to see them for they consistently win medals at the Genée and other competitions - you have to travel.  London may be a Weltstadt and its ballet schools are good but they have no monopoly of excellence.
Posted by Jane Lambert at 04:25