The Beautiful Dancers at the Gala for Alessia 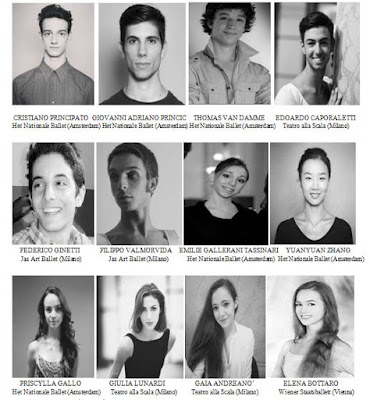 More on the Gala for Alessia.

The brilliant young dancer and choreographer, Cristiano Principato, whose photo appears in the top left hand corner, has persuaded 11 of his chums to come to Trecate in North West Italy to dance in a gala to raise funds for the Casa Alessia to carry out reconstruction work in Burundi (see Principato's Project 7 April 2016).

Casa Alessia is a charity established in memory of a remarkable young student called Alessia Mairati who had intended to work for those less fortunate than herself. Alas, she died in an air crash before she could do any of that work but her father set up the charity to do some of the work that she would have carried out. It is a very sad but also very beautiful story (see Some More Information on Alessia 30 April 2016).

Every year a fund raising concert takes place in Novara in which Cristiano had always hoped to participate. He could not do so while he was at ballet school but he can now. He has brought all those excellent young dancers from the Dutch National Ballet, La Scala ballet, the Vienna State Ballet and Jas Arts Ballet to the Silvio Pellico Theatre in Trecate for a splendid show.

The programme will begin with Tempo which Cristiano has choreographed for himself and will include extracts from Swan Lake, Coppelia, The Sleeping Beauty and The Pharaoh's Daughter which we don't see very often in England. There will be another work from Cristiano called Paladio which he has created for the Dutch National Ballet and will end with Ernst Meisner's beautiful short work Embers which is one of the best I have ever seen.

Where us Trecate? I hear you say. It is about 15 miles south of Milan's Malpensa airport which is well served with flights from all major British airports as well as Budapest (if Mel or Ryosuke are interested), Oslo and Stuttgart. Trecate is just outside Novara on the railway line and near the motorway between Turin and Milan. Although it is very close to the airport it is rather awkward to reach by public transport which is why Holiday Taxis, easyJet's partners in Milan, had the cheek to quote me an exorbitant £120 for the 30 mile round trip. Don't pay it folks! The chaps in Burundi need your money rather more. Put at least some of that dosh in the collection when Cristiano passes round the hat at the end of the show. There is a bus from Malpensa airport to Novara which stops at Novara railway station from where there are frequent trains to Trecate (see How to get to the Gala for Alessia 4 May 2016).

By bringing the ballet to Trecate Cristiano will give his dad an opportunity to see him dance. Mr Principato senior has been unable to travel long distances for medical reasons. He has only read about his son's triumphs in Amsterdam, London and other places up to now. On 28 June he will see not only his son but some other fine dancers who like Cristiano will be big box office in a few years time.

The Silvio Pellico Theatre is at 24 Piazza Cattaneo in Trecate and the Macri restaurant is at number 20 where I shall be in the chair from 19:00.
Posted by Jane Lambert at 08:11