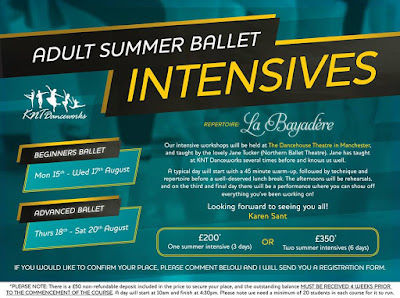 Between the 15 and 20 Aug 2016 Jane Tucker of Northern Ballet Academy will run two intensive workshops on La Bayadère for KNT Danceworks in Manchester.

I did Jane Tucker's Swan Lake Intensive last year (see KNT's Beginners' Adult Ballet Intensive - Swan Lake: Day 1, Day 2 and Day 3) and her Romeo and Juliet Intensive in April and although those experiences nearly killed me I would not have missed them for the world.

Although La Bayadère is one of the most beautiful romantic ballets it is not performed very often in this country.  I have only seen it once and that was a performance by The St Petersburg Ballet Theatre at the Coliseum last year with  Irina Kolesnikova and Denis Rodkin in the leading roles (see Blown Away - St Petersburg Ballet Theatre's La Bayadere 24 Aug 2015). As it is not so well known I shall be publishing a number of articles on as many aspects of the ballet as I can.

I will start with a treat which is a trailer for the Dutch National Ballet's production in 2009.

The National Ballet will perform the ballet again in Amsterdam between the 8 Oct and 12 Nov 2016 which will be the first opportunity for most of us to see it.  Amsterdam's Stopera is actually cheaper and easier to visit than Covent Garden for many of us outside London despite the pound's fish dive. There's lots of information about the current production on the company's website (see La Bayadere Natalia Makarova after Marius Petipa).

Here are some other articles about the ballet and its background.