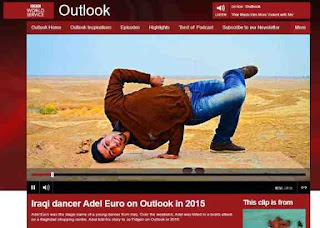 EVEN if you have never heard of Adel Euro, chances are you’ll be aware of the manner of his death.

Adel was one of 280 (and counting) people killed when a shopping mall in Baghdad, Iraq, was bombed at the weekend.

Adel (his stage name) merits a mention on a blog about dance because he was making a name for himself as a hip hop/street dancer – despite all the risks that go with that in somewhere like Iraq.

I hadn’t heard of Adel until the other night, when the BBC World Service’s Outlook programme marked his murder by re-broadcasting an interview they did with him late last year:

What shines out through the interview (even through a translator) is Adel’s sheer love of and determination to dance. His first real encounter with dance was a video of Michael Jackson. “I felt like I was born then,” he says.

His family warned him off dancing because of the danger it put him in: it is seen as a sign of homosexuality, which is illegal in Iraq. (That’s in the parts under government control, of course – in areas held by Daesh/Islamic State, gay men have been thrown to their deaths from buildings because of their ‘sin’.) How lucky are we in places not like Iraq to be able to dance how we want, where we want, when we want (no matter how well or badly that may be)!

In the interview, Adel recounts how he was arrested by the police while dancing in a park; he was released when he managed to convince them he was practising martial arts! (Martial arts are ‘manly’, so OK for men to do.)

In the end Adel wasn’t killed because of his dancing; he died because he happened to be at a shopping mall when some murderous inadequates decided to detonate a lorry-load of explosives there.

Which is sadly ironic, given the hope for the future that he reveals at the end of the interview. “One day,” he says, “I’m going to leave Iraq and go to a place where people love dancing, not fighting.”