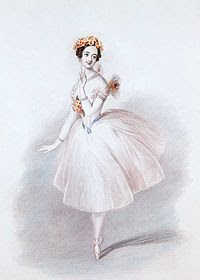 I have often written about the close relationship between Manchester and English National Ballet (see Manchester's Favourite Ballet Company 29 Nov 2015). That relationship will be fortified on 11 Oct 2017  when the company performs La Sylphide and The Song of the Earth in our city.  Set in the Highlands and probably inspired by the novels of Sir Walter Scott, La Sylphide ought to be our national ballet (see La Sylphide 7 Aug 2015).

This is a beautiful ballet with a simple story of human frailty and a charming score.  It is important to the history of dance as it was the first ballet in which dancing en pointe was used to achieve an impression of flying.  English National Ballet has staged a version of this ballet before.  In 1979 it presented Peter Schaufuss's version and it was that version that the Queensland Ballet brought back to London (see Jane Lambert and Gita Mistry A dream realized: the Queensland Ballet in London 17 Aug 2015). The Royal Ballet also has a version but that has not been performed since 21 May 2012 (see La Sylphide on the Royal Ballet's website). Our only other experience of that ballet was in Jan 2015 when principals and soloists of the Royal Danish Ballet performed extracts from the work at the Peacock Theatre (see Royal Danish Ballet Soloists and Principals in celebration of Bournonville 11 Jan 2015).

Those principals and soloists reminded us that La Sylphide was created by August Bournonville for the Royal Danish Ballet where he was resident choreographer and ballet master. One of his illustrious successors in the Roya Danish Ballet is Frank Andersen who served as its artistic director of that company from 1985 to 1994 and from 2002 to 2008. Andersen has produced La Sylphide in many companies around the world (see La Sylphide in the Productions section of his website).  One of the countries in which he has staged the ballet is China where Andersen has a particularly strong following in China as a choreographer, director and teacher (see Frank in China on his website).

Andersen will create the version that the English National Ballet will dance in Manchester (see 2017-18 Autumn/Winter Season Announcement 9 March 2017 on the company's blog). The company will also dance the ballet in Milton Keynes between 17  and 21 Oct 2017 and at the Coliseum between 9 and 13 Jan 2018. I look forward to this production very much indeed.
Posted by Jane Lambert at 07:06