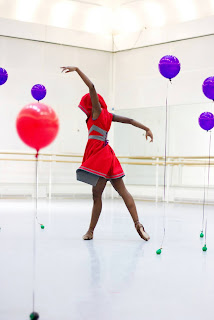 
The culmination of Ballet Black’s Triple Bill at the Barbican was Annabelle Lopez Ochoa’s Red Riding Hood, which, predictably, was a reworking of the traditional fairy tale. Red Riding Hood is a coming of age allegory, and this is not the most sinister interpretation – Cira Robinson’s innocent Red Riding Hood is seduced by Mthuthuzeli November’s Wolf. It is also a non-violent interpretation, no one is eaten, shot or cut open as in various gothic versions.
The ballet follows the familiar storyline of an innocent being subverted by a serial seducer, emerging wiser and more worldly. But the delivery was far from predictable! First, because the most compelling character was November’s sexy, charismatic Wolf, who stole the show with his superb dancing and characterisation – and comic timing, which included some fun tricks with a lasso-style tail. November’s enthusiasm for the role comes through as well – when he smiled at the audience, he drew us into the story and we all smiled back, and when he applied his seductive techniques to the female wolves, we were seduced too! My only awkwardness with the narrative is the ‘traditional’ theme whereby the female protagonist seems mostly passive, and is manipulated by others until the very end. There is some compensation for this in the form of some sexy female wolves – Isabela Coracy, Sayaka Ichikawa and Marie Astrid Mence.
In terms of choreography, Annabelle Lopez Ochoa blends Cira Robinson’s classical elegance with a hip-hop vibe, particularly for the Company of Wolves (José Alves, Isabela Coracy, Sayaka Ichikawa, Damien Johnson, Marie Astrid Mence and Jacob Wye), and Yann Seabra’s costumes include hoodies and masks. Mention has to be made of José Alves as a brilliant comedy grandmother, whose characterisation included some skilled and amusing pointe work! The show was enhanced by creative lighting and props – particularly the lighting, which worked with the dancers’ silhouettes, as well as flowers and balloons, and gave the piece an ethereal, magical atmosphere.
It is worth seeing the Triple Bill just for Red Riding Hood’s originality and entertainment value, but the first half of the show balances out its unique style with two pieces that showcase Ballet Black’s range of styles and techniques and the dancers’ athletic strength, technical ability and versatility.
While Red Riding Hood combined contemporary and classical styles to a superb modern soundtrack (I almost wish there was a soundtrack album too), Michael Corder’s House of Dreams, and Martin Lawrance’s Captured presented more traditional, and simpler choreography, costume and music.
The triple bill opened with House of Dreams, another new piece for this season, featuring two couples (Sayaka Ichikawa and Damien Johnson; Marie Astrid Mence and Jacob Wye) performing alternating pas de deux to four Debussy pieces, two of which are preludes. The simple, classical choreography set the scene for the evening, highlighting the dancers’ beautiful physiques and demonstrating their strong classical technique.
Captured changed the tone, with the deliberate dissonance of Shostakovich’s string quartet reflecting an element of conflict in the relationships of and between two couples. Cira Robinson and Mthuthueli November were a particularly dazzling and intense partnership, and Robinson’s, long legs, exquisite extensions and beautiful lines were mesmerising. The fantastic quality of the dancing and the simple, elegant costumes compensated for the storyline being unclear around the relationship between Robinson and November and the second couple, Isabela Coracy and José Alves who also danced with elegance and energy. The piece was perhaps slightly long – this was not a problem for these fit, athletic dancers, who showed no signs of tiring, but some younger audience members seemed to be shuffling around in anticipation of the interval. As this didn’t happen in the second half which was one long piece – Red Riding Hood – it seems that some Ballet Black fans prefer to be told a story through dance and struggle to follow a more abstract theme. And they are real fans – there was general appreciation throughout and cheering at the end of the show!
I expect Terpsichore readers, who are familiar with dance, will agree with me that the Triple Bill was a well-balanced show.  As an amateur dancer, I also appreciate the more classical pieces which show off Ballet Black’s virtuosity and individuality. They are, without exception, beautiful dancers – technically, and aesthetically. Their energy and enthusiasm shines through every piece and they are a pleasure to watch, whether or not you are into dance. I brought a friend who has only been to the ballet a few times and he loved it too. The show is entertaining, uplifting and a great night out.
Cassa Pancho founded Ballet Black in 2001 to showcase international dancers of black and Asian descent. The company certainly does that, as well as presenting original and striking interpretations of traditional/classical themes that are entertaining and memorable. This year’s main event, Red Riding Hood, was no exception. It is another triumph for Cassa Pancho and the company. I could easily watch the whole show again! The Barbican Theatre was a perfect performance space for them but Ballet Black are worth seeing anywhere. They are now on tour at various venues across the UK http://balletblack.co.uk/events/-- see it if you can!