It didn't start promisingly.  A bare stage.  A handful of musicians clutching their instruments. A chap in a tuque smoking a fag.  A slightly flabby bespectacled middle aged gent in his underpants with a rope round his neck like a leash walking in circles and bleating occasionally. A lady in a wheelchair.

The house lights went down and sinister looking types in wide brimmed hats circled the semi-naked gent.  After performing a ritual dance one of them tugged at the rope. The bleating quickened.   They brought him to the floor, splashed water over him whipped him with towels but then they clad him in shirt and trousers. They led him to a chair with a microphone in the centre of the stage and sat him down.

"I won't say another word until I have a cup of tea" announced the man in the chair. Someone poured him a cup and handed it to him.  The man in the chair asked for a cigarette and that was provided too.  He began to tell his story and the man in the tuque and the lady in the wheelchair approached the front of the stage. From that point the story of Swan Lake emerged.  My impatience and scepticism evaporated and I became absorbed.

The man in the tuque was the Siegfried of the tale though he was called Jimmy in this story. He was disorientated and depressed because he had lost his father and was about to lose his home where his family had lived for 300 years.  He lived in the house with his disabled mother.  It was his 36th birthday and she wanted him to find a nice girl and settle down. Instead of a crossbow she gave him his father's old shot gun. By now, gentle reader, you should be seeing parallels with the ballet. The parallels were not exact because the tale was set in modern Ireland but it was much closer to Petipa than David Nixon, Graeme Murphy or Sir Matthew Bourne.

The swans were four young girls who had been students at the local girls's secondary school.   One of them,  Fionnuala, had been ravaged by her parish priest who had also been the girls' divinity master and chaplain.  Fionnuala's sisters caught him flagrante delicto.  "If any of you breath a word of any of this", he threatened, "you will be turned into a filthy animal," That is what seems to have happened to the girls for they disappeared from home and were never seen again.

Jimmy went down to the lough with his gun one night with a view to shooting himself.  Just as he was about to squeeze the trigger a swan swooped down and distracted him. A duet ensued between Jimmy and the Swan which was as tender as Petipa's.

Jimmy's mum threw a party for his birthday and invited every unattached girl in the neighbourhood plus the lecherous priest.  The priest dragged a a big cardboard box onto the stage which contained a swan with black feathers that looked just like Fionnuala or the swan that had saved Jimmy's life at the lough.  Jimmy tried to approach her but was repelled.  He became distracted and retired to his home with his gun.  A local councillor visited him.  Jimmy appeared brandishing the gun.  The councillor panicked and complained to the police.  Firearms officers arrived at Jimmy's house.  They ordered an unarmed Jimmy to place his hands above his head.  When he failed to comply they shot him. 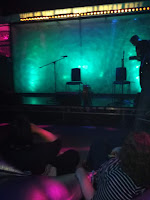 In the last scene the dancers tossed swans' down into the air.  One of them  menacingly swung a bin liner full of the stuff before emptying its contents over the front rows of the stalls.  Clearly the audience loved the show for nearly everyone rose to their feet.  Indeed, I loved it.  Mancunians stand up for all sorts of shows for which I would never rise like Akram Khan's Giselle but they were right about Teac Damsa's Swan Lake.  It may not have been ballet.  It was not even all dance.  But it was great theatre.

After the show the audience were invited to a dimly lit bar behind the stage that I never knew existed.  It was furnished with cushions, easy chairs and lip-shaped balloons.  Soft drinks were on sale for a pound and alcohol was not much more expensive.  Three members of the band - a violinist, cellist and an electric viola player - serenaded us with traditional Irish music.  At one point, a guest cellist called Mary joined the band on stage to sing a song about sorting socks.  Many companies hold Q & A after the show which I always attend out of respect for the dancers.   It is probably a mistake because it breaks a spell. I think audiences much prefer to remember the artists under the lights with makeup.  Yesterday's after show concert was so pleasant.  It will always remind me of this show.

Teac Damsa are at the Lowry for one more night.  As I am in Move It! at The Dancehouse tonight (see Our Turn to Impress 16 May 2018) I can hardly recommend a rival show but if you get the chance to see this show anywhere else but the Lowry tonight you really must watch it.
Posted by Jane Lambert at 09:34