Update on the Trecate Gala 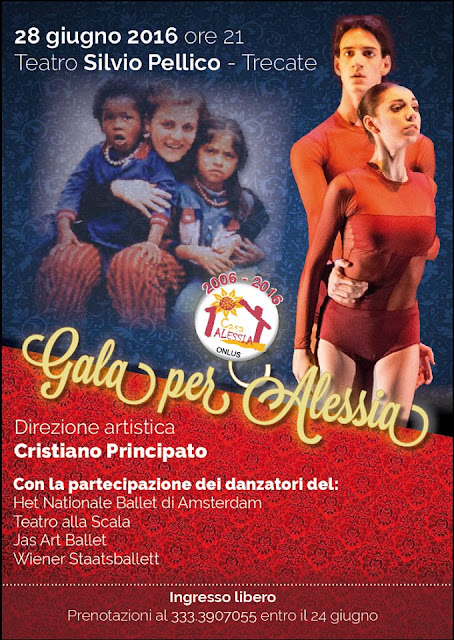 Earlier this month I wrote about a gala that Cristiano Primcipato is organizing in Trecate near Novara at 9 pm on 28 June 2016 to raise funds for Casa Alessia to carry out relief work in Burundi (see Principato's Project 7 April 2016).

I have now spotted this splendid poster for the Gala for Alessia which states that Cristiano will be the Artistic Director and that his dancers come not only from the Dutch National Ballet but also La Scala Theatre of Milan, the Jas Art Ballet and the Vienna State Ballet.

I would very much like to see the show and I had sent several emails to the box office to try to get a ticket but I have not yet received an answer.  Now I know why.  Admission is free (Ingresso libero) but you have to call the number at the base of the poster before 24 June to let them know you are coming.  As the object f the exercise is to raise funds for the relief work I am sure that someone will be passing a hat round.

The address of the theatre appears to be 24 Piazza Riccardo Cattaneo which is not far from the railway station. Milan seems to be the nearest airport but it does not seem to be easy to get a train to Trecate.  If I can get some folks from England to join me we could hire a car.
Posted by Jane Lambert at 17:17