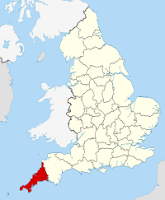 The peninsula in the far south west of our island is a magical land that I know well. I am told that I took my first steps on the sands at St, Ives where my parents lived when my father taught at Redruth. They returned to Cornwall for a few years while I as at St Andrews. During that time my address in St Austell was one of the remotest in the student directory. I have also spent many holidays and weekends in the duchy particularly in Looe and its environs.

"I can't believe that I am in England" remarked my friend on her first trip to Cornwall to which I replied "You are not." Administratively it may be part of England but it has an identity that is quite distinct despite centuries of emigration to the Americas, Antipodes, other parts of the British Isles and the rest of the world and a massive influx of migrants and visitors from every part of the world over the last 100 years or so. That identity is based largely on culture with a strong literary and musical tradition inspired by a rich folklore with its tales of mermaids and pixies.

Drama and dance are part of that tradition including the famous passion plays and furry dance. Duchy Ballet, Cornwall's national ballet company, has drawn on that tradition from time to time with such works as The Mousehole Cat and The Mermaid of Zennor (see the Productions page of the Duchy Ballet website). Some of those works were created or staged by Terence Etheridge who has enjoyed a distinctive career as a dancer and choreographer with some of the world's leading companies including the London Festival Ballet which is now known as the English National Ballet.

According to Kay Jones, the artistic director of Duchy Ballet, the company started because
Standard YouTube Licence

many children and indeed adults in Cornwall had never seen a full length classical ballet. Thanks largely to Jones, Etheridge and their collaborators that lacuna has now been filled.The company performs a full length work at the Hall for Cornwall every year which gives young Cornish dancers valuable stage experience. Some of those young people have been accepted by the Royal Ballet School, the Rambert School, Northern Ballet School and other well known ballet schools (see the "Springboard" column of the About page on the Duchy Ballet website).

According to the company's Facebook page, its next performance will be The Sleeping Beauty which it will dance on 17 and 18 March 2017. Somehow Team Terpsichore will get a reviewer to that show for Duchy Ballet is just the sort of initiative that this website and its associated blogs are keen to support.  The company seems to have created an audience for dance for the Hall for Cornwall is visited regularly by the Birmingham Royal Ballet, Rambert and other companies. Also, Plymouth, whose hinterland includes much of South East Cornwall, has always been visited by the leading national touring companies.

Of course, most of those who study ballet have careers or ambitions that lie outside the stage and it is good to see that there are many ballet schools in Cornwall some of which offer classes to adults (see the Dance Schools page of Duchy Ballet). The dance agency for Cornwall is Dance and Theatre Cornwall and Plymouth Dance is the dance agency for Plymouth and surrounding districts.
Posted by Jane Lambert at 07:31