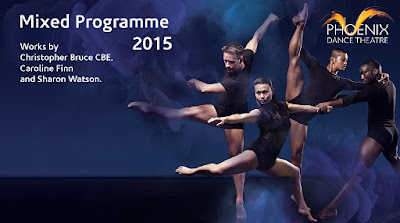 Phoenix Dance may be a small company but it is at the forefront of contemporary dance in the UK  It has strong dancers who confidently deliver.  I was therefore delighted to be one of a number of guest who had been invited to see Until.With/Out.Enough which is to form part of a mixed bill to be danced at the Linbury between the 11 and 15 November 2015 and as part of the company's 35th year Birthday celebrations  to be delivered in 2016. The performance took place in Leeds last Friday in a studio in the building that Phoenix Dance shares with Northern Ballet.
Sharon Watson, the company's artistic director, introduced the piece to us.  She explained that it had been created by Itzik Galili. in 1997. It is about the importance of the experience of the moment.  She described it as a "work in progress" which will be more polished by the time it is performed in London. I have to say I that it is not clear where further polishing is needed for the work was very well done and exciting. The piece came through to me as being about struggles of relationships and experiences we encounter in life; how they fit in to others around us; how we interact with them; and how we cope or don't cope with those relationships and experiences,

The space was owned  as the dancers burst on stage to the music of  Henryk Gorecki and they maintained that momentum throughout the show. It was a dramatic piece. It was like a vortex.  The emotions expressed by the dancers rippled through the audience who almost participated in the show.. Exciting stuff.  There were solos, duets and group dances. Each flowed into the other in sync. .Some of those duets were between males who showed great tenderness to each other. It was a tight performance and the audience loved it.  The applause was deafening and very well deserved..

After the performance I spoke to Sharon Watson and other members of the company about how the show was put together.. Although the work was created by Galili, Sharon and Caroline Finn must also share the credit. They added layers and nuances to the work, Galili visited the company and outlined his choreography. He was represented by Elizabeteh Gilbat who worked with the company's choreographers and dancers. The whole process took about 4 weeks. It was interesting to compare that process with the one discussed in the Narrative Dance in Ballet talk on 20 June 2015 (see Jane Lambert My Thoughts on Saturday Afternoon's Panel Discussion at Northern Ballet 21 June 2015).

I look forward to seeing this and Phoenix Dance's other works when they visit the Royal Opera House in November. 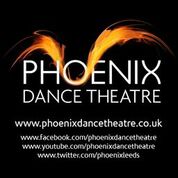