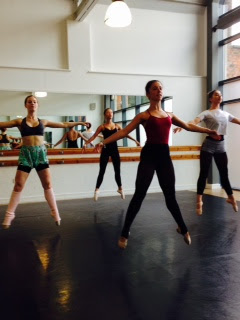 A few days ago I wrote about Serendipity. Chantry Dance Company about which I have written a lot in the past is another example of serendipity. Formed in reaction to a Chinese bureaucrat's unfamiliarity with the concept of freelancing it has become a significant touring company attracting such guest artists as Dominic North whom I last saw in Matthew Bourne's The Car Man (see my review of Chantry Dance's Chasing the Eclipse 26 Sept 2014). The Company has always been engaged in education and indeed it was at one of their workshops that I made their acquaintance in the first place (see Chantry Dance Company's Sandman and Dream Dance 16 May 2015). Now it has put its educational activities on a formal basis by launching the Chantry School of Contemporary and Balletic Arts.

If I were young again with some ability and a vocation for dance (and could not be deterred by Matthew Henley's report that "Most professional dancers ‘earn less than £5k a year’" 24 July 2015 The Stage) this is one school that I would consider very seriously. The reason I would consider it seriously it is that it is run by Rae Piper and Paul Chantry who are young and still on an upward trajectory in their dancing careers. Paul Chantry is also a talented choreographer. The quality of their work has been recognized and rewarded with commissions in Rome, Japan and Covent Garden in the last 9 months alone. The best chance for a young dancer to make a reasonable living out of his or her career would be by taking some tips from Piper and Chantry.

What would give me some hope that I might find work at the end of my course is the curriculum which includes classes in nutrition for the dancer, audition technique and marketing as well as classical and contemporary ballet. modern and contemporary dance and acrobatics. How many other dance schools offer classes in the last skill? The fees at £4,500 a year are not beyond the range of most families and in the few cases where such fees just cannot be raised scholarships and bursaries are available.

If I were the parent of such a young dancer I would encourage him or her to consider the Chantry school because Chantry and Piper are persons of principle. I am not going to embarrass them by repeating their tweets and posts to Facebook but I have noted their posts about such things as literacy and other matters outside dance and strongly approve of them. I love reading about their little dog, about their wonder at their discoveries in Japan and Italy. In Chasing the Eclipse Piper expressed her wonder at the universe with an enormous smile. It is upon her more than any other dancer that I have tried to model myself on the two occasions that I have been inflicted on the paying public. I can imagine her viewing the lakes, mountains and temples and castles of Japan and the ruins and archaeology of ancient Rome with that  same expression of wonder.

The vocational course is just one of the School's activities. There is also an associate programme whose show at Sadler's Wells I reviewed last year (Chantry Dance Associates: Lots of Promise 28 July 2014 ) and a summer school whose award ceremony last year I also attended (see Chantry Dance Summer School 2 Aug 2014). I have already mentioned the workshops in which I have participated and I woukd add that Gita and I are making enquiries with a view to facilitating one in Manchester on a convenient occasion.

This school fills a very obvious need and it deserves to do well. Its programmes have already been successful. I look forward to even more from them as Piper and Chantry develop this activity.
Posted by Jane Lambert at 10:37