I saw the evening performance of Cinderella by the Dutch National Ballet's at the Coliseum on 11 July 2015 and loved it. I am aware that not everyone did but I can't see why because for me it was magical.  The dancers were as light as chiffon ribbons. The sets and lighting were ingenious. The costumes were gorgeous. Anna Tsygankova was my idea of Cinderella and Matthew Golding was the perfect prince.

I have been shown some of the criticism of the Dutch production on BalletcoForum and I actually overheard a conversation in which someone boasted of having walked out of the theatre at the first interval because she had better things to do like watch television. What a waste if true! And what nonsense! As for the milder criticism on BalletcoForum I do not see how anyone could have been bored by stars like Golding or Tsygankova and I cannot understand comments that the performance was vulgar or that it was not like Ashton's.

I have not seen quite so many versions of Cinderella as Jane (see the first paragraph of her review of Wheeldon's Cinderella 13 July 2015) and in particular I have not seen Ashton's but I do not believe that all new versions of Cinderella have to be like Ashton's to be great.  If all new work in ballet were compared to the those in the past, where would innovation and creativity lie?  Where would be the opportunities for choreographers to explore classic themes with their dancers and add value to them?  I have seen Nixon's for Northern Ballet and Matthew Bourne's as well as Wheeldon's and I enjoyed all three.   All were different but all were good in their own way.  I have yet to see Ballet Cymru's version and I learned that Christopher Hampson is working one for Scottish Ballet at the panel discussion on 20 June 2015. I hope to see that too.

Perhaps the reason for my heresy is that I do not consider myself to be a "balletomane" though I do love ballet as I love all the performing arts. I think the word balletomane must have been coined by Arnold Haskell in his book Balletomania : the story of an obsession which was published in 1934. Now how can anyone take pride in an obsession? I would be worried if I believed that I was succumbing to any sort of mania,

The story of Cinderella has a special resonance for me as it does for many British Asians. We are, of course, brought up on the Western version of the story at primary school and on television like everybody else but we also have our own ancient equivalent of the story which is derived from Sanskrit verse. In our version Cinderella is called Shakuntala. Here is a summary that I found in Indian Cinderella - History for Kids. There are also too many Indian women and indeed women in this country of Indian and Pakistani heritage who are real Cinderellas in that they are brought up in the shadow of their brothers and after marriage their husbands and are thereby denied the opportunity in their own right. That is not to say that all arranged marriages are like that. Most develop into very beautiful relationships but I would hate to be married off in my early teens or told that that I could not have a say in choosing my marriage partner as was of the old tradition years ago.

I digress into Indian culture because earlier in the day I attended the matinee of Bend It Like Beckham at the Phoenix Theatre. Now that is another type of Cinderella story if you care to think of it. 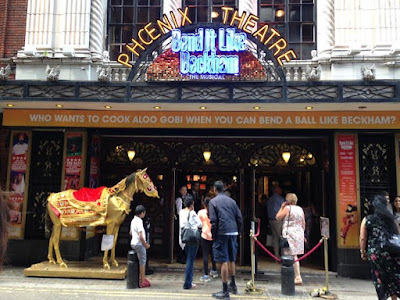