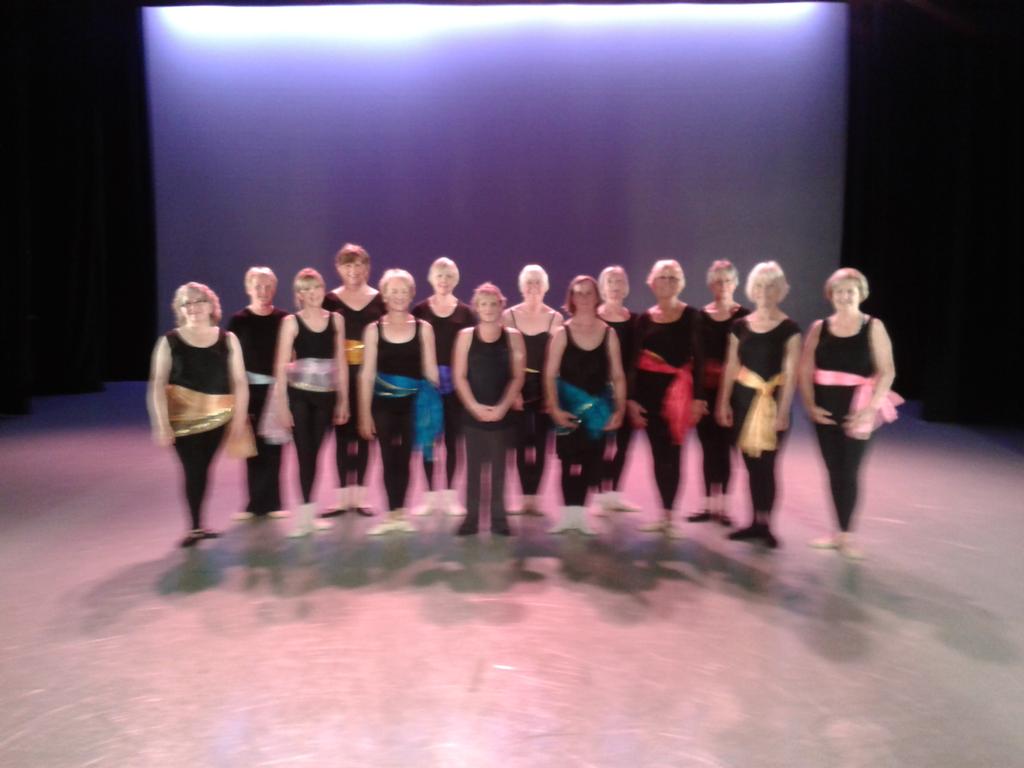 Yesterday I danced in  my second ballet. It did not have quite the same edge as my first time on stage because I already knew what it would be like to dance in a commercial theatre (see The Time of My Life 29 June 2014). Nevertheless, it was still a thrill.  One of the reasons why it was such a thrill was that I knew that I would be dancing before people who mean a lot to me. In particular, Fiona, the teacher who coaxed me back into class a month after I had lost my spouse to a horrible disease when my life was at a very low ebb.

The performance in which I appeared was the over 55 class's contribution to Northern Ballet Academy's end of year show. Northern Ballet Academy does great work in the community. Consequently, there are a lot of classes many of which were represented in the show.  There were so many that we had to be organized in four performances each with a separate cast.  Our's was the last performance which began at 16:30. It included students from the CAT (Centre for Advanced Training) programme as well as some younger kids such as Fiona's daughter who is already something of a pro at the tender age of 9 having already danced Pammy in the Great Gatsby, the young Ondine and one of the mice in The Nutcracker.

As happened last year, we were mustered in the lobby of Northern Ballet at 14:45.  Our teacher and choreographer, Annemarie Donoghue, led us to one of Phoenix's studios on the 6th floor. We had a short class of pliés, tendus, glissés and cloches at the barre and then a couple of run throughs of our piece to the music. To our great surprise and delight we got most of it right. Annemarie took us down to the theatre where we rehearsed a couple of times on stage. Annemarie corrected a few details but otherwise we were OK.

We returned to our studio where we waited for our call which came very quickly. Rather than take the goods lift which gave us our only anxious moment last year we crept down the back stairs and waited our turn. There were some children on stage before us dancing to Elvis Presley's Jailhouse Rock. They finished their routine and we found our way on to the stage in the dark. The lights came on and our music began. The programme described it as Lullaby by Lulaby.   Now I must confess I have never heard of Lulaby and neither (so it would appear) has Google, YouTube. iTunes or Spotify. One of the members of our class who is a retired teacher attributed it to Thomas Schoenberger but I can't confirm that. Be that as it may it is a lovely composition which I have enjoyed listening and dancing to.

The choreography was very different from last year's. It was less spectacular but required much more concentration.  We started in groups of three.  The left hand dancer of each group raised her arm and she was followed sequentially by the middle dancer and the dancer to her right. That was mirrored by the dancer on the right, followed by the middle dancer and the dancer on the left. We then followed a weaving movement that reminded me of a figure of eight of the Dashing White Sergeant or Eightsome Reel in Scottish country dancing. We repeated that exercise with more épaulements and figures of eight. We advanced, retired and turned to the right. We retired, advanced and turned to the left.  We then courued on demi-pointe flapping our arms like wings. Annemarie told us to think of ourselves as swans.

As the music changed we broke into two lines, the front line to do some jumping and the back line to do balancés. The jumpers retired and we advanced doing balancés to the right and left followed by several pas de bourrés. We retired to the wings as the jumping group did their sautés.  The balancés group entered stage left with two temps levés.  We entered from the right with two more and ran across to the front of the stage where we waited for the next music change.

In the final movement we formed our two lines again and repeated the épaulement exercise but this time in the style of a Mexican wave, We concluded with a lovely port de bras exercise that we had done in class for several weeks before the show.

The applause was deafening. We curtseyed and exited and made our way to the stairs but were told to stop before we had reached the first landing. We learned that we would be required for a curtain call of the whole company. That had not happened the year before and I felt very proud.  While waiting for our call Fiona's daughter spotted and greeted me. It was lovely to see her.  The children were called on first.  Then I ran on followed by the rest of my class.  The CAT dancers came on last.  There were speeches and prizes and finally the curtain fell.

I think our performance was more polished than last year though one of my guests said he preferred last year's show because it lasted longer and there was more jumping.  Another said that we had performed better in the technical rehearsal. I wanted to learn what Fiona thought about our show but she had warned me that she had another appointment to attend and I never got to see her. She has however texted me this morning to say "well done for yesterday" and that I had "smiled the whole way through." I am glad if that was so because I was pleased to be there and I had hoped to communicate my pleasure to the audience in the way that Ruth Brill and Rachael Gillespie do.

Annemarie told us that there was some doubt as to whether we could run a show next year because there will not be time for a choreography class. However, she also told us that there will be one final chance to perform on the 24 Sept 2015 as part of a new community project to bring the arts to older people who are living on their own. Performances are very important for any ballet student including very elderly ones like me because ballet is a performing art which belongs in the theatre rather than the rehearsal studio. I do hope that September will not be my swan song.
Posted by Jane Lambert at 17:43