The Academy of Northern Ballet in Leeds says that it "provides world-class, non-residential dance training to all ages and abilities." I have attended some of those classes including several that have been given by Annemarie Donoghue and one by Chris Hinton-Lewis,  On Saturday 4 July 2015 some of the students who had attended those classes showed off their skills in Northern Ballet Academy's end of year show  in the Stanley and Audrey Burton Theatre in Leeds.

So many students attend Northern Ballet's classes that their show has to be divided into several separate performances each with a different cast.  The performance that I attended was the last of the day which started at 16:30. It consisted of the Academy of Northern Ballet, Saturday Ballet Classes 1 and 2, Jazz 1-2 and the Over 55 Class. As their name suggests the Over 55 Class consists of individuals (mainly but not exclusively women) who are aged 55 or above.  Although I would never have guessed it from their appearance or performance, I happen to know that several of those members are well over that age. The Academy dancers are those who have already studied dance to a high level and plan to continue their training at such establishments as Elmhurst and Central. The students in the Saturday Ballet and Jazz classes are much younger. I am aware that at least one of them is aged 9. 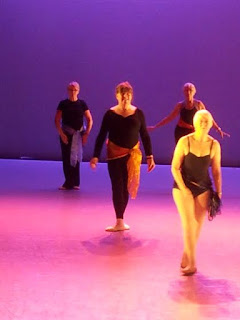 I was impressed by all the students but the ones that I had come to see were the Over 55 class as I had attended some of their classes and had made the acquaintance of several of them. They danced Lullaby by Lulaby, a composer I had never heard of but whose music I like very much. Jane Lambert, who took part in the performance, has described the choreography in My Second Ballet 5 July 2015. Earlier in the week I had attended the technical rehearsal where I took video  and the still pictures which I reproduce here with the kind permission of Annemarie and each of her dancers.

Each of the performers danced well and it would be unfair for me to single any out for special praise. The complicated sequences at the start and end of the piece where each dancer raises her hand in turn went off without a hitch. The dancers synchronised their arm movements in the courou and I was impressed by the jumping group and the temps leves of the balance group. Some of the dancers managed quite an elevation which is all the more remarkable given their age. Having seen the rehearsal I know the amount of work that the dancers had put into this show through their classes and rehearsals. They all seemed to be enjoying themselves. The one thing that they could have done better would have been to dance off stage. They seemed to walk off into the wings after they had performed their dance which detracted a little from the overall slickness of the performance. Having said that it may be that I am a little sensitive to that issue as the choreographer of a show in which I had appeared had been very hot on that point. 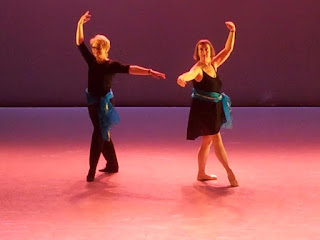 The crowd seemed to like the piece for they clapped enthusiastically.and I think I heard at least one whoop. The show finished with a curtain call by the whole company which was nice. The compeer thanked the choreographers who had made the show possible. Annemarie and Cara O'Shea (who had worked with David Nixon and Yoko Ichinoa on the Academy's opening and closing pieces and the children's dances) acknowledged the well deserved applause. There was a short speech from the compeer, the drawing of a raffle and the presentation of prizes before the curtain fell for the last time.

I see from the programme that many of the graduating students are going to first rate schools for their professional training and I join with the company in wishing them well in their further training and subsequent careers.
Posted by Gita Mistry at 15:01