Mixed Programme - with a sweet centre 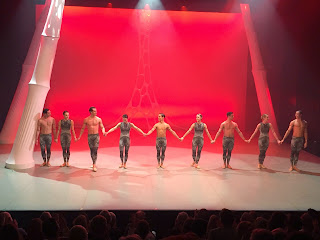 Northern Ballet is known for storytelling, and last night’s programme mostly lived up to this reputation. The Mixed Programme too lived up to its name: the five ballets designed by five choreographers each told a different story.

Angels in the Architecture – Mark Godden’s Shaker-inspired choreography to Aaron Copeland’s Appalachian Spring (which includes the song ‘Lord of the Dance’) – featured six couples, with brooms and chair as props. The girls’ flowing circle dresses were particularly lovely – pretty, elegant and used to great effect choreographically as the dancers pulled them over their heads in different ways and I loved the creative use of the Shaker chair which had apparently inspired the piece. Personally, I wasn’t too sure about the brooms – I understand the motif, but there were a couple of times where they seemed to confuse the pattern of movement.

Christopher Hampson’s Perpetuum Mobile to Bach’s violin concerto in E Major was a beautiful classical piece which did not have a clear narrative – at least not one that I could discern – but followed the patterns of the music. I liked the way the dancers’ skill and dynamism brought this set piece to life as they leapt joyfully across the stage.

After the first interval, Little Monsters offered a complete change of tone with Dreda Blow and Isaac Lee-Baker doing marvellous things with Demis Volpi’s choreography. This was a fresh, innovative interpretation of Elvis Presley’s music, about as far away stylistically from 1950s cliché as you could get.  I thought it worked perfectly, making the most of the dancers’ exquisite physiques and energy. The theme was a love story, told in three songs, and it was both entertaining and emotive. I can still picture the resonant simplicity of ‘Are you Lonesome Tonight?’ with the two dancers who had been so closely entangled and engrossed with each other in the first two songs – ‘Love me Tender’ and ‘I want you, I need you, I love you’ – standing apart, each in their own spotlight.

A Northern Trilogy was perfect too, in a different way, offering a sensitive and entertaining take on the company’s northern roots, with Jonathan Watkins’ clever and cute interpretation of Stanley Holloway’s monologues, ‘Yorkshire Pudden’, ‘One-Each-A –Piece All Round’ and ‘The Lion and Albert'. As well as the dancers’ accomplished and enthusiastic performance and the straightforward storylines overlaying some deeper themes, the costumes and lighting accentuated the bitter-sweet sentimentality of these pieces. Yorkshire Pudden was lit in a way that suggested a sepia photograph, while the fresh brightness of ‘The Lion and Albert’ evoked images of the mid-20th century seaside holiday and managed to include humour without descending into pantomime.  Everyone in the auditorium was smiling – the programme had been designed with a sweet centre.

The final and most ambitious piece was Kenneth Tindall’s The Architect. This was highly original – and dazzling. I hardly know where to start. It was also the most obscure narrative of the programme, a cryptic version of the biblical creation scene with Adam and Eve – well, multiple Adams and Eves and a few pounds of apples. A beautiful opening sequence with what seemed to be Adam and Eve chasing a single apple set the scene for a dramatic sequence around birth and creation. There then followed a complex sequence involving several apples being passed mouth-to-mouth between the dancers while Adam had his own apple routine. This was certainly different, but I was a bit distracted from the tango-like ambiance by all the apples. In the final sequences a single apple, this time suspended above the dancers, provided a focal point for some clever and quite acrobatic group sequences enhanced by darker lighting design. Personally, I preferred the sections where there was just one apple in play, as it were.

I may have picked at a couple of details, but I was hugely impressed. It was a pretty tall order to create a contemporary ballet that balanced biblical narrative with biological symbolism and it looked amazing and the demanding choreography showcased the dancers’ extreme athleticism and flexibility. It also showed what an excellent company Northern Ballet are, particularly in the group sequences that expanded and contracted around the single, suspended apple. There were also some wonderful partner and individual pieces.

This was my first experience of Northern Ballet and I will definitely find opportunities to see them again. I love their originality, their clear identity and the way their work can be appreciated on multiple levels. I felt that their excellent dancing spoke for itself and didn’t need embellishing with complex staging. Having said that, it would be interesting to see The Architect performed in a bigger space.